The Michigan Department of Technology, Management & Budget has released its summer (June–August) teen employment forecast for 2019. With a very positive overall Michigan job market in 2019, significant numbers of job openings for teens are expected in the summer months. As always, however, there will be competition to fill those job openings. One clear trend each spring and summer is the large seasonal influx of teens into the labor market seeking summer jobs.

The industry sectors in which teens typically find summer jobs include arts, entertainment, and recreation, accommodation and food services, food and beverage stores, and clothing and clothing accessories stores. The public sector also provides a significant number of summer jobs that are ideal for teens through summer jobs programs in areas such as parks and recreation. Many of these industries are seasonal in nature and require larger staff levels during the spring/summer period when teens are available for work. 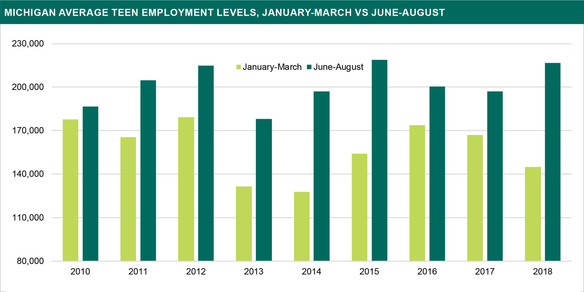 One of the most prominent characteristics of the teen labor force over the past two decades has been a steady decline in attachment. This attachment is measured by the number of teens in the labor force divided by their population. The resulting figure is termed the Labor Force Participation Rate (LFPR). National Current Population Survey (CPS) data show that in the year 2000 the annual teen LFPR was 52.0 percent with a summer increase to 59.7 percent. This participation rate recorded steady declines in the years leading up to the Great Recession and reached recessionary lows during the summer of 2011 at 34.1 percent and 40.0 percent, respectively.

Since that time, teen labor force participation has essentially remained constant nationally with an annual rate of 35.1 percent and corresponding summer rate of 40.1 percent during 2018. Some of the reasons cited for this include an increased emphasis on school and attending college; more summer school attendance; and an increased use of internships. College tuition costs have continued to rise substantially, and teen earnings are often low and now pay little towards the overall costs of college. Additionally, teens face continued competition for jobs from adult jobseekers. 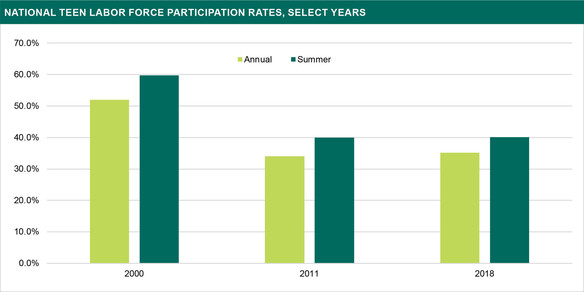 About 208,200 teens (16- 19 years) are projected to find jobs in Michigan during the summer of 2019 (June-August). In addition, another 38,200 teens will be actively seeking jobs but will remain unemployed. Michigan’s teen summer jobless rate has been on a downward trend during this decade. With the positive condition of the state’s labor market in the summer of 2019, the teen unemployment rate is expected to be 15.5 percent. This is well below the teen jobless rate for most of the last decade, but remains above rates of unemployment for adults.