Volunteers for this year’s Aquatic Invasive Species Landing Blitz will be on hand at nearly 30 locations across the state to remind watercraft owners they should follow best practices and clean their boats, trailers and equipment to help prevent the spread of aquatic invasive species. 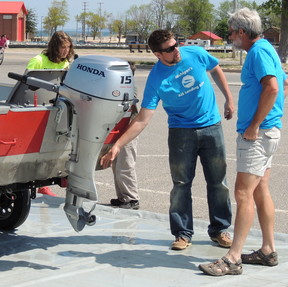 The Landing Blitz corresponds with Aquatic Invasive Species Awareness Week, June 28 through July 5, and includes all Great Lakes states and Canadian provinces. The Michigan Department of Environment, Great Lakes, and Energy (EGLE) is partnering with the Department of Natural Resources (DNR) and the Department of Agriculture and Rural Development (MDARD) to sponsor the education and outreach events across Michigan.

To find a Landing Blitz event in your area, contact Kevin Walters, EGLE aquatic biologist, at WaltersK3@Michigan.gov or 616-250-8637 or check out an event map at the Great Lakes Commission website.

The most important message from volunteers this year is for boaters and anglers to “Clean, Drain and Dry” boats, trailers and all equipment and gear after each use on any lake, river or stream to prevent spreading invasive plants and other aquatic invasive species from one water body to another. State law requires:

Following these simple steps can limit the spread of invasive species from one lake or river to another. A short EGLE video from a past Landing Blitz shows how easy it is to clean, drain and dry boats and trailers.

“Millions of dollars are spent each year in Michigan to control the impacts of aquatic invasive species such as zebra mussels, sea lamprey and Eurasian watermilfoil,” said Kevin Walters, aquatic biologist at EGLE. “It only takes a few minutes to do a walk-around of your watercraft and trailer and drain water to make sure everything is clear of material that doesn’t belong.”

Violations of the state law requiring boaters to clean boats and trailers and drain water can carry a fine of up to $100. DNR conservation officers will continue their efforts to educate everyone who uses the state’s waterways about their responsibilities through direct contacts and in partnership with interested groups.

Aquatic invasive species have the potential to harm Michigan’s environment, economy and human health. Invasive aquatic plants such as Eurasian watermilfoil and phragmites can crowd out native species and form dense monocultures that limit food and habitat, block access for boaters and anglers and foul equipment such as boat motors and fishing gear.

Michigan’s Invasive Species Program is cooperatively implemented by EGLE, DNR and MDARD. The program’s goals are to prevent new introductions, limit the spread of established species, detect and respond to new invasions, and manage and control established species.

Invasive species sightings can be reported at Michigan.gov/Invasives by clicking on the blue “Species Profiles and Reporting Information” button on the middle of the page.

Caption for photo above: A Landing Blitz volunteer at a previous event in Manistee discusses with a boater the importance of cleaning, draining and drying his boat to avoid spreading invasive species from one water body to another.