“During the past 10 months, Michigan has succeeded in what is likely the nation’s largest collection and disposal program for PFAS-containing AFFF,” said MPART executive director Steve Sliver. “This product has been responsible for contaminating drinking water in communities across the country, including those around hundreds of military bases and commercial airports. Other states are reaching out to MPART to learn from Michigan’s effort and we urge the EPA, Department of Defense and FAA to look at this program as a model for reducing the risk of PFAS contamination nationwide.”

The AFFF was identified through a 2018 MPART initiative to survey and educate fire departments throughout Michigan on the appropriate use and clean-up of PFAS-containing firefighting foam. 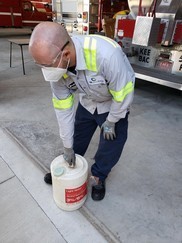 Led by State Fire Marshal Kevin Sehlmeyer, the survey identified 383 fire departments with Class B AFFF in their inventories – roughly half of the departments surveyed.

“As more and more fire departments became aware of our free collection program, interest in disposing of this surplus AFFF increased and we quickly exceeded our target of collecting 37,000 gallons,” Sehlmeyer said. “We’re pleased to have removed this surplus foam from circulation and hope it plays a part in reducing unnecessary PFAS exposures in the Michigan firefighting community.”

Under the contract, US Ecology collected Class B AFFF liquid from local fire departments and transport it to its licensed hazardous waste facility in Idaho where it is solidified and disposed of on site. The Department of Environment, Great Lakes, and Energy (EGLE) last year awarded US Ecology of Livonia a seven-month, $1,441,671 contract to collect and safely dispose of Class B AFFF.

Known to scientists as per- and polyfluoroalkyl substances, PFAS are a group of chemical contaminants used in thousands of applications globally including firefighting foam, food packaging and many other consumer products, and exposure to PFAS is correlated with several harmful and serious health effects. These compounds also are used by industries such as tanneries, metal platers and clothing manufacturers.

For more information on the program and the State Fire Marshal’s initiative to educate first responders on best practices around the use of firefighting foam, visit the MPART web site at: Michigan.gov/PFASresponse.

To learn more about PFAS, visit the MPART website: Michigan.gov/PFASResponse.