Glendale, Arizona – The Michigan Department of Agriculture and Rural Development’s (MDARD) Rapid Response Team (MI RRT) was the proud recipient of the 2022 Elliot Grosvenor Award from the Association of Food and Drug Officials (AFDO) during their 2022 annual meeting held in Glendale, Arizona.

Established in 2010, AFDO’s Grosvenor Food Safety Award is given to recognize outstanding achievements made by food safety programs within State Departments of Agriculture, Natural Resource Agencies, Public Health Departments or Environmental Conservation Departments in the United States or Canada. The award goes to the program best showcasing improvement, innovation, or sustained high performance within a food safety program.

“I am proud to have Michigan’s commitment to early detection and rapid response when public and animal health is threatened honored by AFDO,” said Gary McDowell, MDARD Director. “The MDARD RRT regularly trains and prepares for response through sampling exercises where multiple staff are deployed to hit the ground running when emergencies happen. Kudos to the MDARD team for their hard work and consistent dedication keeping Michiganders safe.”

MDARD’s Rapid Response Team is one of the first six states in the Food and Drug Administration’s (FDA) Rapid Response group across the nation and has been in place for more than a decade. The MI RRT uses a decentralized organizational structure capable of involving emergency responders from a wide range of agencies and entities. The team has been investigating and controlling outbreaks since 2008 including detecting salmonella in pig ears, foodborne diseases and more. The RRT focuses on early detection, rapid investigation, and outbreak control by improving multi-agency coordination and collaboration. 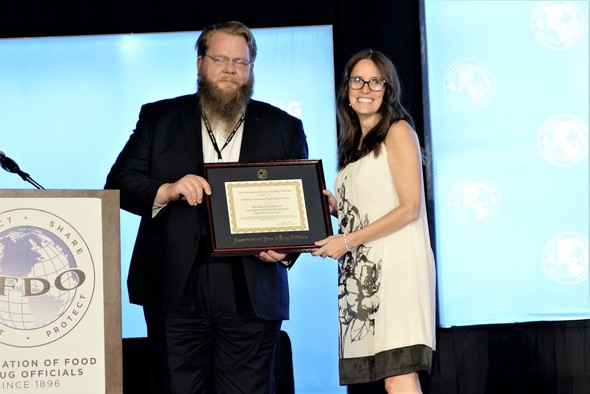