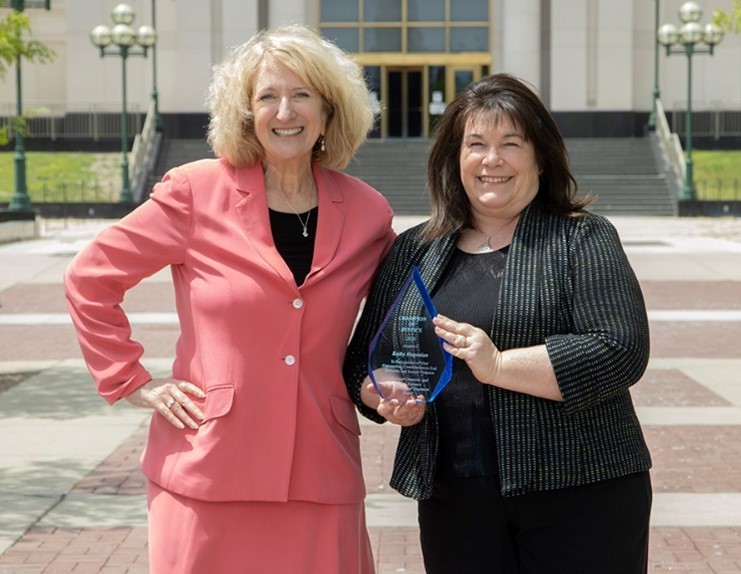 From left, The Hon. Amy Ronayne Krause and Kathy Hagenian

"Throughout her 35 years of experience in the movement to end violence against women and children, Ms. Hagenian has been recognized for her commitment to survivor empowerment and to ensuring the experiences of survivors and advocates remain at the forefront of our work," said Debi Cain, executive director of the Division of Victim Services in the Michigan Department of Health and Human Services. "Her training and policy focus is centered on honoring the lived experience of survivors, which includes understanding trauma while emphasizing survivors' strength, resilience, and healing."

Hagenian has served as the coalition policy director since 1996. She is widely respected for her leadership in policy initiatives and influence in critical legislative reform efforts. Hagenian's involvement includes her role in the Coalition to End Legalized Rape, fighting to include domestic violence indicators in child custody laws, playing a part in making Michigan the first state in the nation to define stalking as a general intent crime, and other anti-stalking laws. She was also instrumental in early reforms to Michigan's criminal justice response to domestic violence.

"I am deeply honored by this recognition from the board," Hagenian said. "I am also profoundly grateful for the privilege to work alongside so many incredible leaders, beginning with survivors, who individually and collectively founded our movement with courage, tenacity, expertise, passion, hope, and wisdom. Though we still have much to do, we have made incredible progress, and I look forward to continuing our journey toward social justice in ending domestic and sexual violence."

Hagenian's expertise in protocol and curriculum development made her a natural choice to assist with the editorial review board of the Michigan Judicial Institute for domestic violence and sexual assault Bench Books, the Michigan Commission of Law Enforcement Standards on response to domestic violence and sexual assault, and early development of high school models of dating violence intervention and prevention.

"We are fortunate, proud, and forever grateful for all the work Ms. Hagenian has done and continues to do every day to ensure victims have a voice at the table," said Judge Amy Ronanye Krause, chair of the prevention board.

Hagenian has served on numerous statewide and national multi-disciplinary groups, including the Governor's Task Force for Prevention of Child Abuse and Neglect, the Governor's Task Force on Battering Interventions Standards, the Michigan Sexual Assault Statewide Systems Response Task Force - as chair, the Michigan Sexual Assault Evidence Kit Tracking and Reporting Commission, participating in policy ad hoc advisory workgroups for the National Network to End Domestic Violence and the National Alliance to End Sexual Assault, the Battered Women's Clemency Project of Michigan, and the Battering Intervention Services Coalition Board of Directors.

Hagenian and her husband, Tim McDonald, have lived in Novi for over 30 years, where they have raised their three young adult children.