A relatively new technique for stabilizing eroding stream banks is showing great promise in Michigan, as a demonstration project on Highbank Creek in Barry County has not only repaired a damaged creek, but has provided excellent fish habitat as well.

The technique, called “toe wood,” has been around for about a decade but hasn’t been used much in Michigan until now. Department of Natural Resources fisheries biologist Chris Freiburger learned of the technique and thought it had applications for some of the issues facing Michigan streams.

The area Freiburger chose for the demonstration project involved a stream that had been dammed for a mill more than a century ago. The dam had been partially removed in the 1920s, but the abutments were left in place until the landowner knocked them down into the creek out of safety concerns. The debris formed a partial dam that not only impeded fish passage, but also contributed to erosion on the stream. A significant amount of sediment was swept downstream, silting in about an acre and a half of Thornapple Lake. 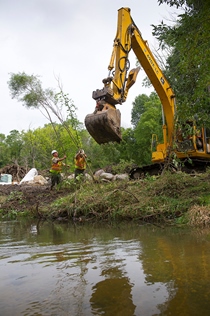 The Barry Conservation District applied for a U.S. Fish and Wildlife Service fish passage grant, as well as a DNR aquatic habitat grant to remove the dam and restore the stream.

“The thought used to be that you could remove a dam and just leave,” Freiburger said. “Sometimes you can, but that isn’t always the best thing to do. Many times we need to stabilize the stream, too, and this landowner was agreeable to stabilizing the stream.”

After the dam was removed, the conservation district hired an engineer to work with Freiburger to design a restoration project. A long set of rapids, made up of bowling ball-sized boulders, was built downstream to address the grade. Engineer Mike Geenen, a Michigan native who now lives in Colorado and works with Fort Collins-based Watershed Restoration LLC, studied the creek upstream – finding its width, depth and length of its meanders -- and designed the channel realignment using toe wood.

“It’s a relatively new science, but this technique has worked out pretty much everywhere,” Geenen said. “It provides stability but also produces better habitat.”

Brandon Spaugh, of North State Environmental, Inc. – a North Carolina firm that specializes in river and wetland restorations and often works with Geenen -- brought in a crew to do the work.

As Spaugh explains the technique, the crew excavates an erosion site, building a shelf on which the crew sets logs – the toe wood – that overhangs the stream bottom. The logs are then covered with smaller diameter logs, slash and brush, and then dirt and sod collected from the surrounding area. The sod could include shrubs and trees – in some cases up to 10-foot-tall willows – that generally survive transplantation. 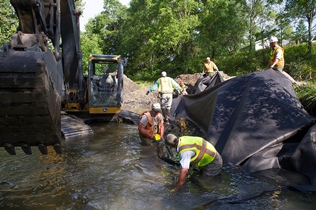 “We’re after immediate stability,” Spaugh said. “With higher flows, the bottom will be scoured out under the toe wood and you have guaranteed fish habitat.”

Geenen said toe wood “is a relatively easy structure to understand and build, and it’s inexpensive when compared to hauling in rock.

“We just finished a project in Minnesota, and two weeks after we finished we saw schools of fish in there. They found the spots where they wanted to be right away,” Geenen said. “We know how to stabilize streams, how to move water, how to move sediment and maintain stream function and allow fish passage, but by building these structures, we create better habitat at the same time.”

A week after the project was completed, a DNR electrofishing crew surveyed the area and found that fish had made themselves at home around the structures.

The deep pools created by the scouring effect under the toe wood will help fish survive winter as well as during periods of drought, while the overhead cover the structures create should reduce avian predation and increase fish survival, Freiburger said.

“Toe wood does a lot of things but there are two primary goals: to reduce bank erosion on the outside bends and increase and improve habitat for invertebrates and fish,” Freiburger said.

“The benefit of toe wood is that where you had sheer, clay banks, you now have a flood plain,” he said. “And you’ve got wood below the surface that’s under the water even during periods of low flow, so it’ll take a century or more before the wood deteriorates. And we all know that wood is important to anglers.”

Indeed, anglers and angler groups have been installing wood structures in trout streams to provide fish cover for a century or more. But Freiburger questions whether they’ve always been located properly so they didn’t interfere with other river functions, such as sediment transport.

“This is a structure, just like any other structure that’s ever been built,” said Freiburger, who invited the DNR’s heavy equipment operators to the demonstration so they could understand the technique. “But were those other structures truly meeting their goals?”

In addition to creating new banks along eroded outside bends in the stream at Highbank Creek, the construction crew cut down the point bars that were built by sediment deposition and reconnected the realigned channel to the flood plain.

“That helps move sediment in the stream and reduces the velocity of the stream to relieve the erosion on the outside banks,” Freiburger said

The DNR plans to use the toe wood technique to restore an eroded bank just upstream of Lyons Dam, when it is removed next summer. Freiburger expects toe wood to play a big role in future river restoration and habitat projects.

“You can’t just throw stuff in the river and expect it to work,” he said. “You have to make sure it is compatible with river processes.”

Learn more about the DNR’s work in fisheries habitat and dam management at www.michigan.gov/fishing.