46dc SOM - State of Michigan - Page Not Found
Some functions of this site are disabled for browsers blocking jQuery.
Skip to main content
MENU

We're sorry, but we're unable to locate the page you requested.

The page may have been removed, renamed, or deleted.

You can try searching for the topic using the search box below.

2a 582
State of Michigan
You are here

There’s an old saw about how you learn new skills – you learn by doing.

That’s the focus of the “Learn to Hunt” program, a partnership led by Michigan State University, with assistance from the National Wild Turkey Federation, the Boone and Crockett Club, Pheasants Forever and the Michigan Department of Natural Resources.

Learn to Hunt is part of the turkey federation’s Recruit, Retain and Reactivate (R3) outreach program and puts would-be hunters in contact with mentors who can guide them through the hunting process.

“(The program) is designed for adults new to hunting,” said Johanna Dart, a social work graduate student at MSU, who assisted in the design of the program for the university’s Fisheries and Wildlife Department.

Learn to Hunt began last fall with a deer-hunting initiative. Recently, 17 adults signed up for a spring session on turkey hunting that culminated in a late May, weekend hunt at the Barry State Game Area in the southwestern Lower Peninsula.

“We wanted to try to offer another species and apply what we learned from the deer program,” Dart said. “We found in our pre-surveys that learning to hunt with an experienced mentor was important. A lot of adults didn’t feel comfortable going out in the woods with a firearm or bow without someone to show them how.”

Dart, 26, said she thinks it’s difficult to learn to hunt via YouTube.

“You can – you can teach yourself anything online – but to have confidence in yourself and grasp some of the concepts, it helps to have someone show you,” she said. “It’s very helpful.”

Dart would know. She’s been interested in hunting for some time, but she found the prospect of approaching someone for more advice somewhat daunting.

“It’s interesting being in my demographic,” she said. “I was adopted by a single mother and no one in our family knew anything about hunting and was never exposed to firearms.”

Dart said it’s “very intimidating” to go out by yourself or to ask someone to take you. 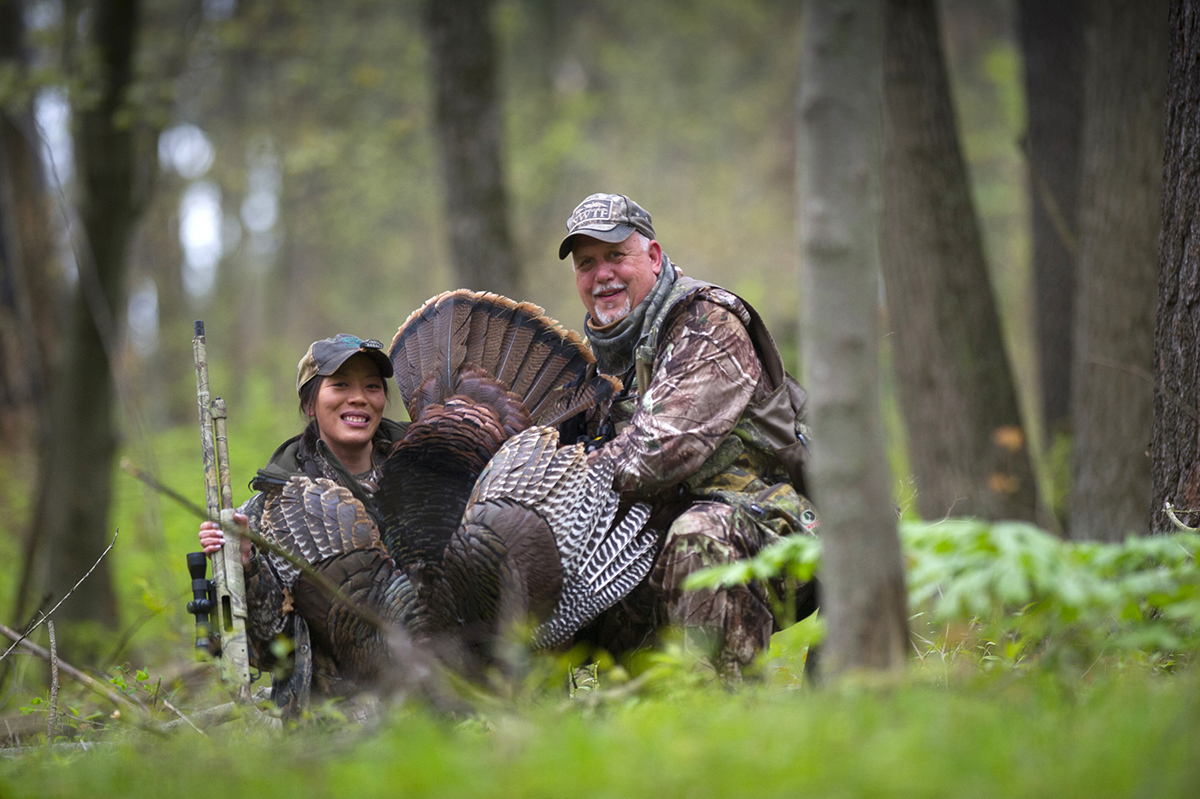 “I took hunter safety with my best friend and I remember going and everyone else was 9,” she said. “I think when adults see that, they think hunting is not for them.”

Dart took part in a hunting outing herself this spring. She teamed up with mentor Steve Sharp – the R3 coordinator with the turkey federation. She successfully killed a turkey.

Sharp, who is a lifelong sportsman and long-time federation employee, said the program is accomplishing exactly what it needs to.

“We had a great time teaching these folks some new tricks,” said Sharp, who has led workshops on safe firearms handling, scouting for turkey and other topics. “I think we’re recruiting some new hunters and that’s our goal.”

A number of the students enrolled in the program killed turkeys this spring, including two at the May weekend event in Barry County.

Steve Vandermey, a 62-year-old first-time hunter, was one of them.

Vandermey and his wife, Ruth, signed up as a team. They shared time with mentor Brian Medendorp the first morning of the weekend hunt.

“My wife and I had been talking about learning to hunt for a couple of years but couldn’t figure out how to get started,” Vandermey said. “I saw a speaker at a sports show, met Steve Sharp and signed up. We needed to learn and this program was made for us.”

Medendorp, who is a heating and cooling contractor from Hastings and a turkey federation officer, took the couple into the woods where he thought some birds might be roosting. 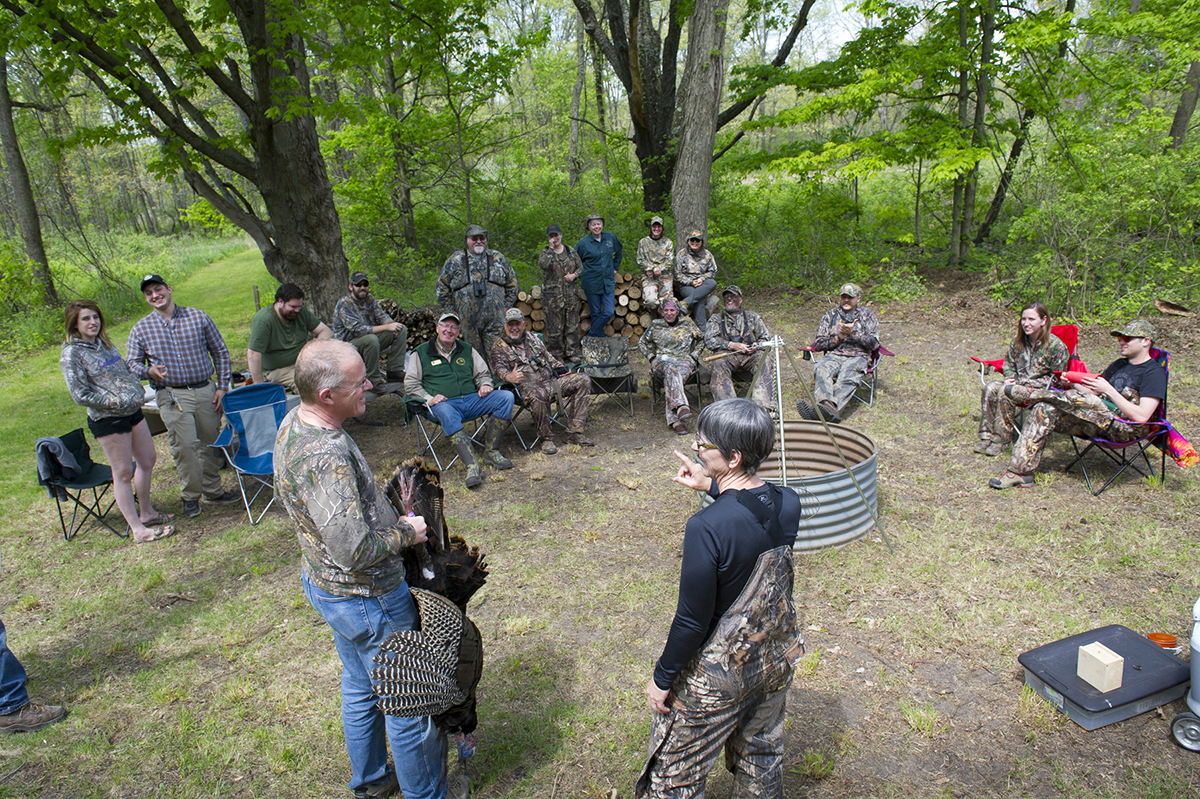 When the trio didn’t meet with any success at dawn, they began walking through the woods, turkey calling.

“We heard a bird gobbling and walked to within 250 yards and sat down and started calling,” Medendorp said. “We got him to come in the rest of the way. He shot it at 27 yards. Perfect.”

“It seemed like it was pretty imposing at first, but now it seems like it’s doable,” Vandermey said. “This program was just what we needed.”

Ruth said, “It was an awesome experience – fun.”

Brooke Burns works at the Gander Mountain sporting goods store in Lansing. She met Mike Vanderguchte, a senior at MSU and an instructor in the Learn to Hunt program, at the store. She signed up for the program when Vanderguchte told her about it.

Burns went out during the first morning of the hunt with her mentor, Wendy Osterbaan, a member of the Thornapple Valley Chapter of the turkey federation. Though they had three birds within shooting range, the turkeys never presented an opportunity.

That evening, the two women went back out.

The pair climbed into a blind and heard a bird gobble at 5:45 p.m. Osterbaan called the turkey. Thirteen minutes later, Burns had killed a 20-pound-plus tom.

“It was pretty exciting,” Burns said. “I think I’m going to have to go again in the fall.” 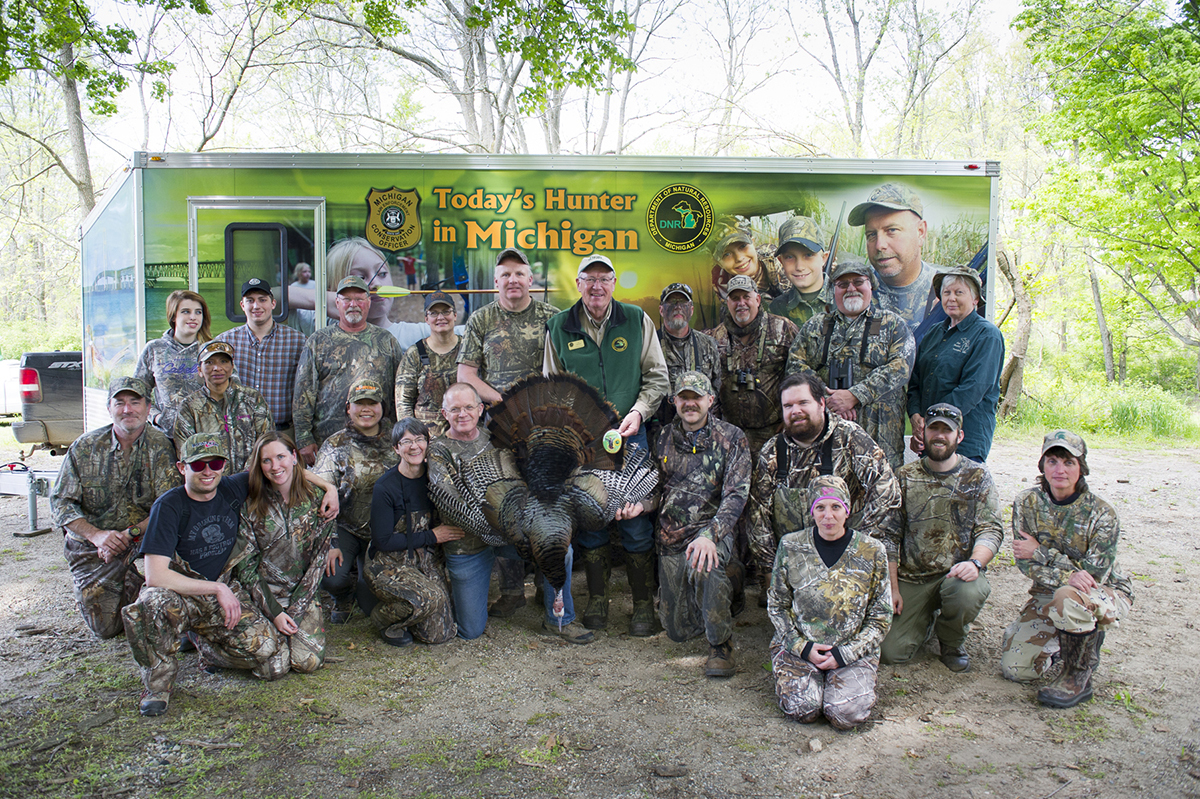 Sharp said that’s the goal, adding that he was especially inspired by the young adults who attended the program.

“Sometimes we miss the boat by going directly to the kids and not recruiting their parents,” Sharp said. “When these folks start having families, they’ll take their kids out.”

Not all the participants killed birds, but they said they now know what to do.

“Only about 20 percent of turkey hunters harvest a bird,” said DNR upland game bird specialist Al Stewart. “Turkey hunting is more about the outdoor experience. Just like fishing, the best stories are about the ones that got away.”

“They had many thrilling stories to share by the campfire each evening,” Stewart said. “Learn to Hunt participants also learned that they can harvest their own food and provide a Thanksgiving meal for friends and family. I’m very pleased with the results of this program.”

Chris Henderson, a doctoral student at MSU in fisheries and wildlife, said the program was just what he wanted.

“I just never had a pathway into it,” he said. “I wasn’t raised around it. I heard about this program and jumped at it.

Henderson said there are some pretty big barriers to getting started.

“Getting your first firearms, learning where to go, this program takes care of all that,” he said.

Dawn Street, a 47-year-old real estate agent from Clarkston, said she has always been intrigued by turkey hunting. She accompanied her sister to a turkey federation “Women in the Outdoors” event, met some turkey hunters, heard about the program and signed on.

“I always had the equipment to go, but nobody to take me,” Street said. “Now I can go by myself.”

Check out a video on the Barry State Game Area Learn to Hunt outing.

For more information on turkey hunting in Michigan, visit: mi.gov/hunting.