To the uninitiated, Tim Riley might appear to be confused.

He’s wandering through a young aspen stand in the northern Lower Peninsula with his English setter, but it’s spring, not fall.

He’s wearing a hunting vest, but not carrying a shotgun.

He’s looking for American woodcock, but not to shoot them.

His vest carries the gear he’ll need for his mission: a notebook, pair of pliers, a mesh bag and a string of small metal bands. 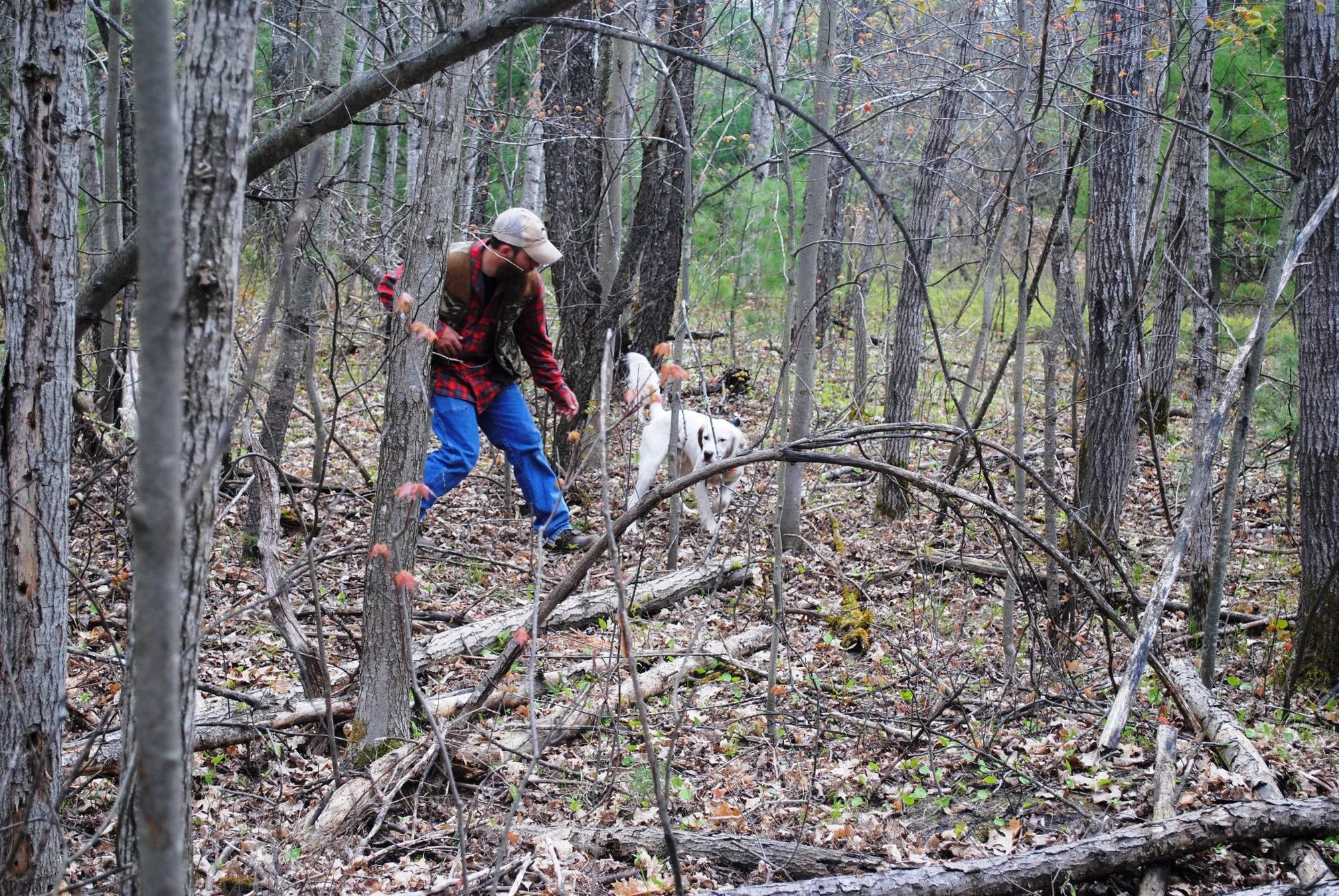 Riley is a woodcock bander, one of nearly 100 volunteers who explore the Michigan woodlots in spring, hoping to find broods of recently hatched woodcock chicks.

On this mid-May morning, Riley’s day had been uneventful until the beeper collar on Rio – one of Riley’s setters – started making noise.

It was a ways off, but when Rio didn’t respond to Riley’s return calls, the young Michigan Department of Natural Resources wildlife technician went looking for his dog.

He found him locked up on point.

Thoroughly surveying the real estate in front of him, Riley spied what he was looking for – an adult woodcock, motionless, its belly pressed to the ground.

As Riley slowly approached, the bird got up and flew a few short yards away. That’s what he hoped to see.

In short order, Riley spotted a woodcock chick, then another. He picked them up, put them in the mesh bag, and retrained his eye on the young forest floor. He found a third chick. And then a fourth, which meant he’d found the whole brood.

Working quickly, Riley recorded the time and date. Then one by one, he used the pliers to clamp a 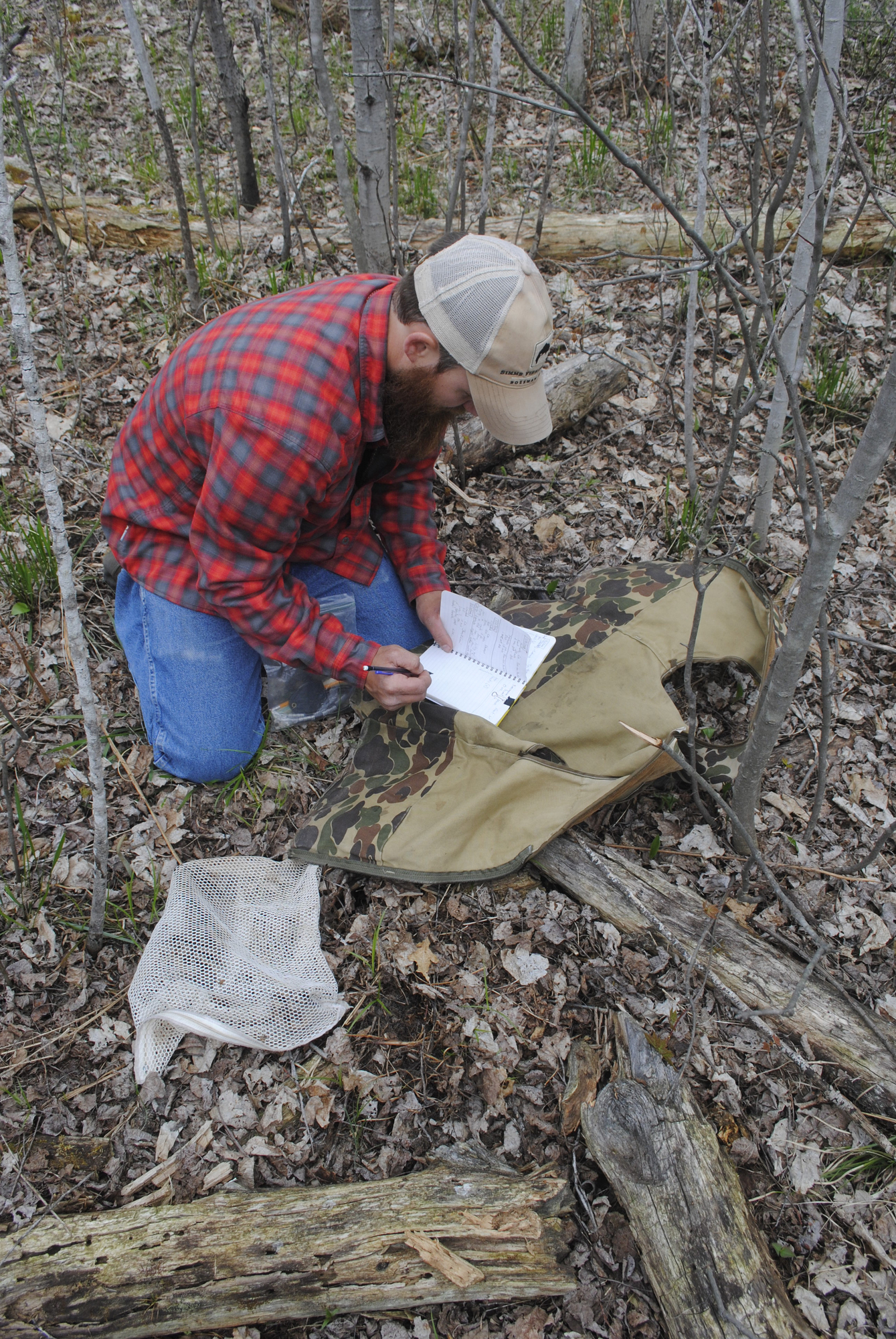 small, numbered, metal band onto one leg of each bird. Then he let the chicks go.

For Riley, woodcock banding is just another outdoor pastime he enjoys for fun when he isn’t working. But his pastime yields information that’ll be helpful to biologists when it comes to managing these migratory game birds.

“In my mind, it’s all scientific data,” said Riley, who was exposed to woodcock banding nearly a decade ago, but only started doing it on his own two seasons ago. He studied under a couple of different banders, “got my setter to where I thought he was good,” and was certified as a Michigan woodcock bander.

“As a DNR worker it gives me a feel for what’s going on in the woods,” Riley said. “When the bands get returned, we get good information. And it doesn’t cost the state a thing. Some guys put in 100 hours a year banding. Can you imagine what it would cost if we were paying state wages?”

Riley banded 10 woodcock chicks his first year, 12 the next. He’s hoping to improve on that this year.

“So I can start mentoring guys and get more guys in the woods,” he said. “The more birds that get banded the better.”

Michigan is the leader among states with woodcock research programs, said Al Stewart, the upland game bird specialist for the DNR.

“We band more through this program with our volunteers than anywhere else in the world,” Stewart said. “We band upward of 2,000 annually.”

The DNR’s woodcock banding program has been in effect since the 1960s when wildlife biologists banded chicks as part of the job.

“Now it’s all volunteers,” Stewart said. “We learned how to catch and band them as part of a scientific study on heavy metals in woodcock. In the late 1980s, we expanded the program.” 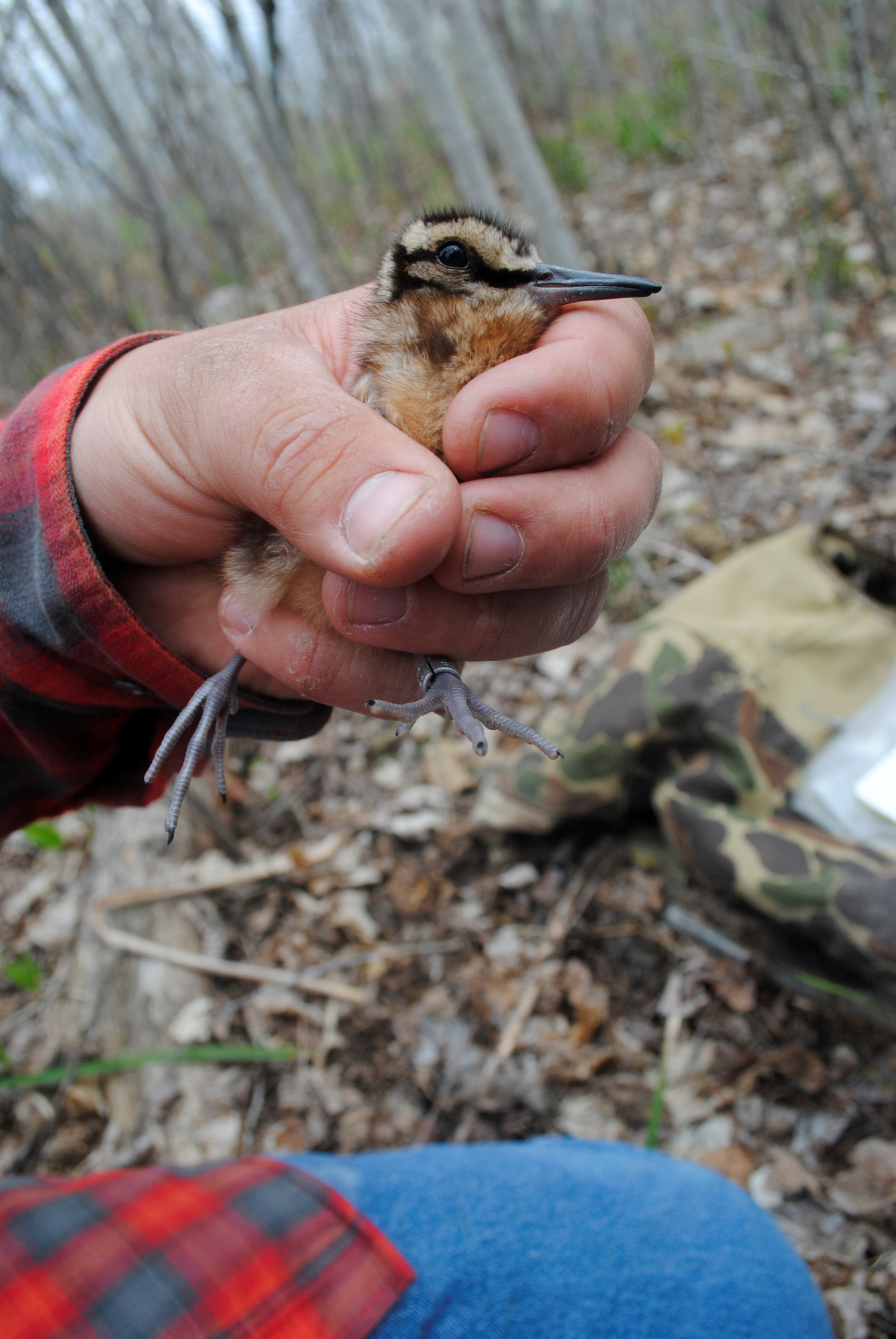 Would-be woodcock banders must be trained by a mentor, show that they understand how to do it correctly, and prove their dogs are under sufficient control not to harm the birds, before they are certified to band on their own.

The DNR holds training sessions every other year with an emphasis on the health and welfare of the birds.

The program has shown through band recoveries that the bulk of birds hatched in Michigan – America’s top woodcock production state – winter in Louisiana and into East Texas.

Woodcock banding begins in mid-April and runs through about June 10.

Woodcock are born with a bill 14 millimeters long. These bills grow 2 millimeters a day, allowing banders to reliably age the birds they find.

“Woodcock lay four eggs, which mature in about 14 days,” Stewart said. “The hens hatch the eggs and the chicks are ready to begin feeding quickly.”

In another three weeks, they reach adult size. It takes about two weeks after they hatch for the birds to fly.

“When you come across a female with chicks, a lot of times she’ll feign like she has a broken wing to lure you away from where the chick are located, kind of like a killdeer,” Stewart said. “She’ll return to her brood after the danger has moved off, and chicks stay with their mothers for some time after they can fly.”

The chicks are very well camouflaged.

“They look like the ground cover and the leaves. It’s kind of like trying to find Waldo in a puzzle,” Stewart said. “The banders are trained to look thoroughly before they even move around. They do ‘the woodcock shuffle;’ they don’t even pick up their feet and put them down so you don’t step on them.”

Stewart said once you find one chick, you can usually find all of them.

“Your mind and eye seem to focus in on them,” Stewart said. 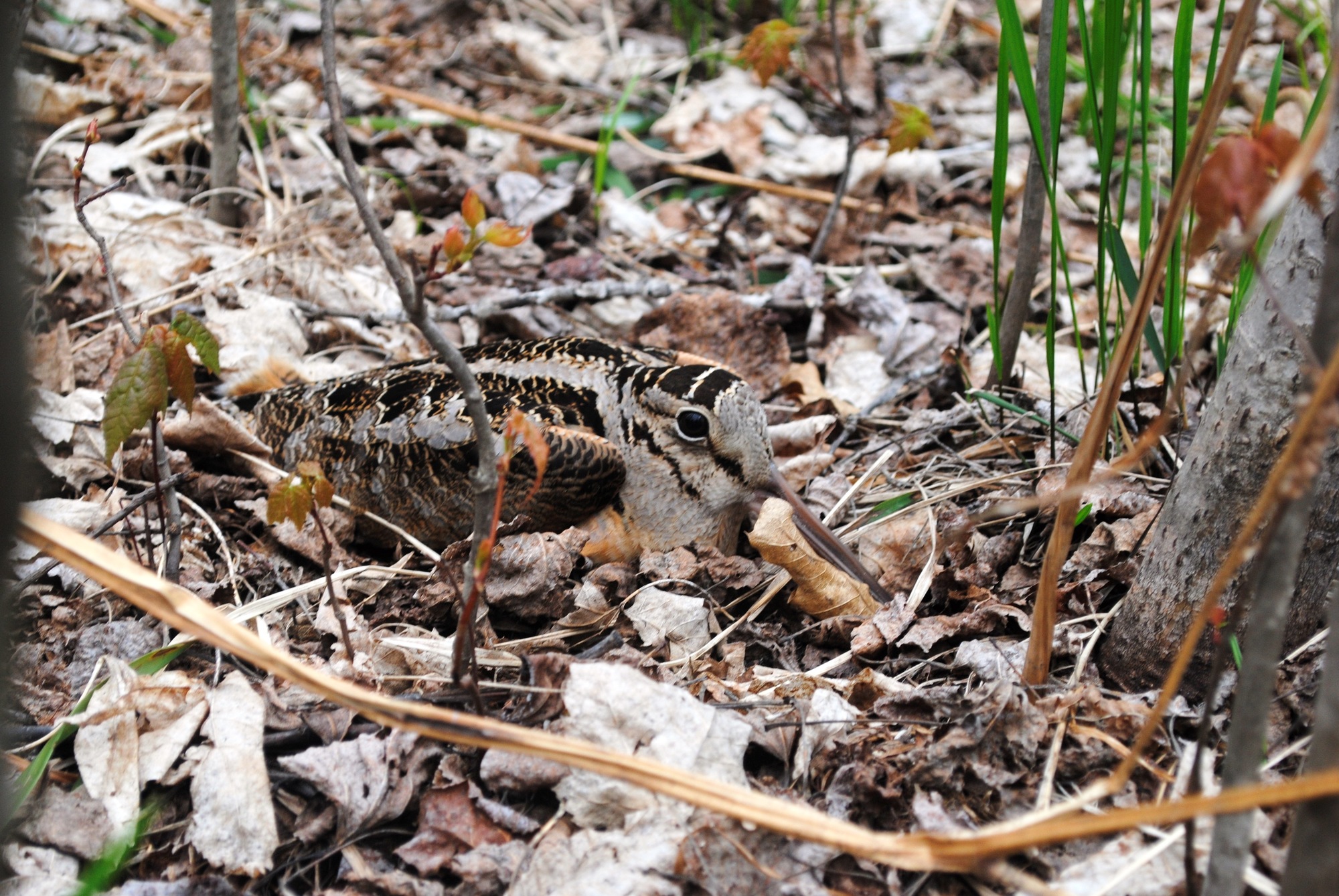 Data from woodcock banders is collected by the U.S. Fish and Wildlife Service in much the same way it collects data on banded ducks and geese.

Band recoveries come largely from hunters, though occasionally people find woodcock that have died from other causes – such as flying into a building – often in urban areas.

“The information allows us to confirm and learn more about woodcock migration,” Stewart said. “We have been able to identify two different flyways – one for the New England birds and another for Midwestern birds.”

Stewart said that when the birds migrate, they show some fidelity to where they are born.

“We have had birds that were taken by hunters the following years, sometimes in close proximity of where they were originally banded,” Stewart said.

Riley, who is 33 years old and takes vacation days to band woodcock, said he can’t wait until he retires so he can spend more time banding woodcock.

And though he’s an avid bird hunter, Riley doesn’t spend any time in the fall in the areas of Crawford or Roscommon counties where he bands woodcock along the edges of high-stem density woodlots in the spring.

“It’s just one of those things,” Riley said. “You kind of feel almost like you’re a parent and they’re your babies.”