When the Michigan Department of Natural Resources sought approval for a hunting license fee increase a couple years back, it promised hunters they’d get “more bang for the buck” from the additional funding.

The DNR is following through by offering grants to conservation groups, other government agencies and interested individuals to implement wildlife habitat improvements in Michigan.

“The aim from the beginning was to get more work done than we’ve been able to do – projects that we couldn’t get to but that we thought were priorities,” said Clay Buchanan, who administers the grants for the DNR’s Wildlife Division.

One of those priorities – the Michigan Pheasant Restoration Initiative – was well represented this cycle as the DNR issued a number of grants for projects creating, enhancing and improving grasslands. 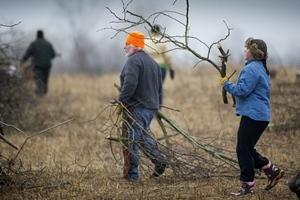 “In southern Michigan, expanding large grasslands is a big deal and we’re prioritizing those efforts as an agency,” Buchanan said. “Pheasants Forever tends to do larger projects that have broader goals – regional goals – and they have a good record of accomplishment.”

Other projects that involved grasslands were awarded to the conservation districts of Lapeer, Gratiot, Ingham and Sanilac counties and the Saginaw Chippewa Indian Tribe.

Grasslands weren’t the only targets of this year’s wildlife habitat grants, even in southern Michigan.

Ana Hedberg, executive director of the Allegan Conservation District, said the grant they received is designed to improve forest habitat for grouse and other game. The district is removing Scotch pine and black locust and is regenerating aspen and tag alder stands.

“The work has been going well,” she said.

Elsewhere, the Ruffed Grouse Society was awarded nearly $70,000 for habitat work in the Baldwin/White Cloud District of the Huron-Manistee National Forest.

“We partnered with the U.S. Forest Service on a non-commercial aspen cutting,” said Eric Ellis, the regional biologist with the Ruffed Grouse Society. “It was old aspen, not scheduled for treatment, and the cutting was done this winter. 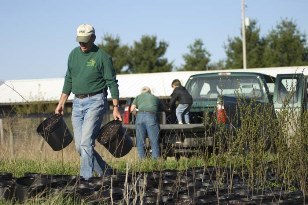 “We’re planting and fencing off mast-bearing trees and shrubs and we’re restoring an oak savannah – clearing and planting oak.”

The DNR awarded the National Wild Turkey Federation an $81,000 grant for habitat improvement in Crawford and Oscoda counties.

“This project will help a variety of species by enhancing wildlife openings and increasing mast production,” said Ryan Boyer, the regional biologist with the National Wild Turkey Federation. “We’ve partnered with Whitetails Unlimited and the Ruffed Grouse Society.”

The grant calls for planting crab apples, hawthorns, serviceberries and oaks, as well as pruning about 300 acres of remnant apple orchards on state-managed lands.

“In April we hired a contractor to cut some non-commercial aspens for habitat regeneration,” Ellis said. “We’ve already planted and fenced a number of crab apples.”

Huron Pines, a nonprofit group based out of Gaylord that works in 11 counties in the northeastern Lower Peninsula, received a grant to enhance wildlife openings in the Pigeon River Country State Forest.

“The large wildlife species, like elk, need large parcels of open land,” said Huron Pines’ Jennifer Muladore. “We’re trying to get invasives out and keep a 65-acre parcel open, spraying with herbicide and pulling out plants.

“We’re also restoring abandoned oil and gas well pads," she said. "They take out all the apparatus and leave just compacted soil. We disc them and plant annual rye. After repeating that process for a number of years, we hope the soil will be good enough to support trees or grasslands and the forest will start succeeding on its own.”

The single largest grant, $99,400, was awarded to Michigan United Conservation Clubs to help fund its “On the Ground” program. Sarah Tropp, “On the Ground” coordinator, said MUCC had scheduled 13 projects this year. 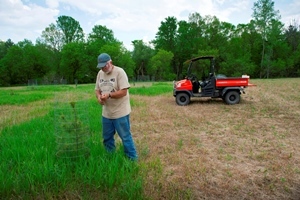 The Chippewa Nature Center near Midland received a $24,000 grant to put in some natural-appearing wildlife food plots.

“We don’t want to put in a corn field or soybean field,” said Curt Holsinger, the center’s invasive species specialist. “Our goal is to put in native grasses, native wildflowers, and forbs that will provide food and cover for a variety of animals. We’re also planting some mast-bearing trees and shrubs – dogwoods and serviceberries – that’ll provide food for the wildlife.”

The work – on the Nature Center’s property at the confluence of the Pine and Chippewa rivers – is expected to draw in turkeys, songbirds and, hopefully, butterflies and other pollinators.

“We’ve been keeping invasives out of there for years,” he said. “To put some native vegetation back in there is just phenomenal, and without the grant money there’s just no way we can do it – our budget’s pretty much used up keeping the invasives out.”

Gib King, a private land specialist with the U.S. Fish and Wildlife Service, is the only individual awarded a grant this cycle. Working on federal land in Iosco County, King has cut 51 acres of non-commercially viable aspen and 15 acres of alder strips for regeneration for woodcock.

“I go out and do the work myself,” King said. “I have a passion for putting habitat on the ground. The Forest Service struggles to get things done. They’ve got a short staff and a long wish list and this was an opportunity to get things done that needed doing.

“It took this grant to accomplish something that needed doing for years and if they didn’t get to it, it might not have been a viable project anymore.”

“There’s actually a big enough chunk of ground there it could potentially hold pheasants,” he said. “It’s not a priority area, but it could be peripheral benefit.”

Buchanan said the 18 projects green-lighted this year were chosen from 30 eligible applications. It’s a competitive bid process; applications are scored on a variety of criteria, including need and potential impacts.

Grantees are required to provide at least a 10-percent match, but those who offer to provide a higher match are rewarded in the scoring process. The next grant cycle, which begins Oct.1, will be for a two-year period. 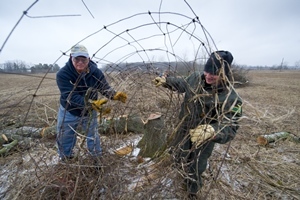 “Some projects – especially the grassland work, from planning to site preparation to actual planting – become difficult to accomplish in one year,” Buchanan said. “We’re expecting to have about $930,000 available.”

Applications for the next grant cycle were due July 20.

“We’re interested in getting all sorts of organizations and people involved,” Buchanan said. “Contact the local DNR wildlife biologist or go to the DNR website to get more information on the process and priorities.”

Learn more about Wildlife Habitat Grants and all DNR grant opportunities at www.michigan.gov/dnrgrants.