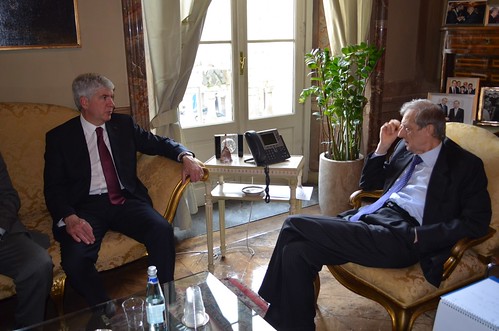 TURIN, Italy – Gov. Rick Snyder and his delegation completed their second day of meetings and an official luncheon in Turin with leaders of automotive companies that have invested in Michigan industry since his last mission to Europe in 2012.

The delegation met with senior executives of Fiat, Comau, Amet, AEC Italia, SAET Group, Satiz, Reply, Co.Mec, Vigel S.p.a. and Teorosi Group as well as U.S. Consul General Kyle Scott and officials of the Turin Chamber and American Chamber of Commerce. The meeting was at the auto industry luncheon hosted by the Michigan Economic Development Corp. and Detroit Regional Chamber. Turin is the center of Italy’s auto industry and home to headquarters of Fiat, Alfa Romeo and Lancia along with numerous suppliers. Snyder and the delegation also met with the city’s Lord Mayor Piero Fassino, a former state secretary for foreign affairs and European Union special envoy.

“We are finding, in business and government settings alike, there is great interest in Michigan’s comeback story and our state’s multifaceted approach to becoming more business friendly,” said Snyder. “One-on-one meetings with decision-makers are vitally important in a competitive global marketplace. Our improved business climate is highly attractive to foreign businesses that are constantly looking for expansion opportunities and for Michigan it can mean opportunities for new, well-paying jobs.”

Another highlight of the delegation’s day was a meeting with leaders of Comau S.p.a., which employs more than 1,900 in Michigan. Comau, a leader in the manufacture of flexible, automatic systems and integrating products, processes and services, operates in North America from its headquarters in Southfield and production facilities in Royal Oak and Novi.

It is a partner in the American Lightweight Materials Manufacturing Innovation Institute that is being established in Canton with federal government support announced in February. Comau will provide the Institute with expertise in advanced manufacturing processes and handling of advanced materials.

Comau is working to establish technician training programs with Oakland Community College, Novi Schools, Oakland County and the city of Southfield. The company will also participate in the first annual Pure Michigan DREAMJOB Summit at Ford Field in June.

The mission marks the first time Snyder and Nigel Francis, the state’s top auto adviser, have traveled together, to meet with European auto-industry leaders.

Italian and German companies play an important role in the Michigan economy, notably:

This is the Snyder administration’s second mission to Italy and Germany, and the 10th investment mission overall. Other missions led by Snyder or Lt. Gov. Brian Calley have been to Japan, China, Korea, the Netherlands, Brazil, Mexico, Israel, and Canada.