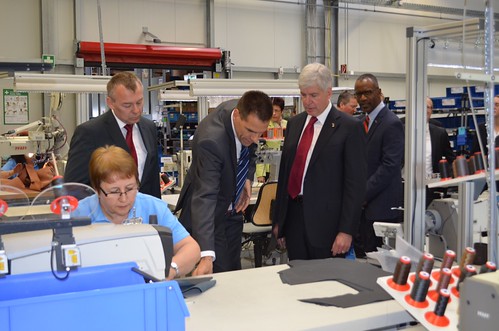 STUTTGART, Germany – Gov. Rick Snyder today visited with community leaders and three automotive companies with current Michigan connections and potential expansion plans, as he and his delegation completed their fourth day of the 2014 Europe mission.

Snyder and the delegation met with Eissmann Automotive, Heller and Mann+Hummel in various cities near Stuttgart, and also with the mayor of Ludwigsburg.

“The meetings were real examples of how Michigan’s automotive industry affects global companies,” Snyder said. “Our position as the center of the auto industry is the reason companies like Eissmann, Heller and Mann+Hummel want to expand their existing presence. We’re making the case that as the global center of the industry, with a strong business climate that is rebounding each day, Michigan is the smart business location at which to grow and create new jobs.”

Eissmann currently has a technical office in Troy, Mich., employing 18 people, with plans to increase through 2014. It is currently looking for a manufacturing site to create interior components, such as dashboards, armrests, steering wheels and inside door panels.

The governor congratulated Eissmann on its 50th anniversary. The company is family-owned, with 10 plants globally employing 4,000 people.

“In the past half century, Eissmann has created a strong company with significant growth potential,” Snyder said. “The luxury car segment, especially among the Big Three, creates significant opportunity for Michigan to be part of its continued success.”

The delegation also visited Heller, and acknowledged the company’s long-standing presence in Michigan, specifically its involvement in Michigan Economic Development Corp.’s Michigan Advanced Technician Training, or MAT2, program. Heller is one of the key partners in the program, currently training seven young people to become mechatronics technicians. The company started its operations in Michigan more than 30 years ago and currently employs 119 people in a Troy facility. It is a global manufacturer of axis machining centers, flexible manufacturing systems and crankshaft machines. The governor’s visit on Wednesday to ZF also highlighted the company’s participation in MAT2.

“When I first visited Heller’s headquarters two years ago, I was so impressed with its apprenticeship program that I brought the model back to Michigan, which is how MAT2 started,” the governor said. “Heller has been a leading partner in MAT2 since the beginning of the program. We thank the company for its 30-plus year commitment to Michigan and look forward to continuing this productive relationship.”

MAT2 is an education model developed in conjunction with global technology leaders, like Heller and ZF, to combine theory, practice and work. Students who enroll in the program receive three years of training with all tuition costs paid by the employer. Students earn an advanced associate degree in a high-tech, in-demand field, and a guaranteed job upon successful completion of the program. They earn a paycheck, while being trained and earning an education.

“To continue our comeback and grow our economy, businesses will need the right talent,” Snyder said. “To build a bright future for our young people, we must arm them with the right skill sets to succeed today and tomorrow. Manufacturing sectors and technology industries are experiencing a shortage of employees with the knowledge, skills and competencies necessary to operate and maintain new systems-based technology. We need to change that to develop the best talent for our state and provide meaningful job and career opportunities for Michiganders.”

The last of the automotive visits today was with Mann+Hummel, who recently announced an expansion in Portage, Mich., investing $1.74 million and committing to 70 new jobs over the next three years. The company has been in Michigan since 1996, consistently increasing its investment and job creation. MEDC supported the company’s last expansion with a $325,000 performance-based grant. Mann+Hummel is the market leader in filtration technology, with more than 50 locations worldwide.

Also while at Mann+Hummell, Snyder met with Werner Spec, mayor of Ludwigsburg, Germany.

The mission marks the first time Snyder and Nigel Francis, the state’s top auto adviser, have traveled together to meet with European auto-industry leaders.

While in Germany earlier this week, Snyder announced that voxeljet, a leading provider of high-speed, large-format 3-D printers, will locate its first U.S. facility in Canton, Mich. The service center is expected to come online later this year and will create 15 to 20 direct high-tech local manufacturing jobs.

This is the Snyder administration’s second mission to Italy and Germany, and the 10th investment mission overall. Other missions led by Snyder or Lt. Gov. Brian Calley have been to Japan, China, Korea, the Netherlands, Brazil, Mexico, Israel, and Canada.