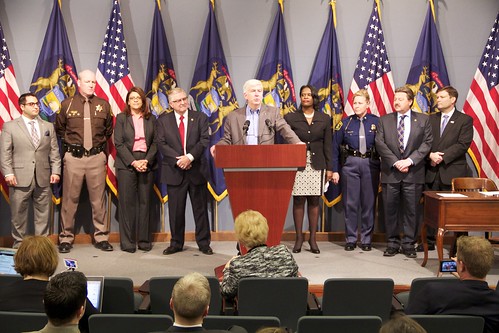 LANSING, Mich. – Gov. Rick Snyder has signed into law a bill that provides tools to help police combat metal theft, an epidemic that puts Michiganders at risk and hurts businesses and communities.

A companion bill, sponsored by then-Rep. Jim Ananich, D-Flint, was signed into law in December.

“We cannot allow metal thieves to damage our homes, farms, utilities, businesses, schools and other public properties,” Snyder said. “By damaging traffic signals, street lights and road signs, these criminals endanger Michiganders. We’ve been working with our partners in the Legislature from both sides of the aisle on this critical issue for two years to find a solution that protects residents and law-abiding people in the industry.”

Metal theft has become a growing problem, with the number of reported crimes nearly tripling between 2011 and 2012, according to Michigan State Police data. The state ranked 10th in the nation for scrap metal insurance claims in a recent National Insurance Crime Bureau study.

HB 4593 includes reforms to make it more difficult for criminals to sell the materials, collecting information from scrap metal sellers at the point of sale to give law enforcement a much-needed paper trail. The bill also prohibits cash payment for scrap metal, and payment of more than $25 would be required to be mailed to an address listed on a valid form of identification for copper wiring and pipes, catalytic converters and air conditioners, some of the most commonly stolen materials.

Signed in December, HB 4595 – now Public Act 217 of 2013 – made it a felony for a scrap metal dealer to purchase scrap metal or an item of personal property if the dealer knows that it was stolen. It also would be a felony for a person to sell such metal items to a dealer knowing that the materials were stolen.