ICYMI: TIME Names Detroit as One of the World’s Greatest Places of 2022

LANSING, Mich. – Today, Governor Gretchen Whitmer and Lieutenant Governor Garlin Gilchrist II celebrated Detroit’s selection as one of TIME’s World’s Greatest Places of 2022. The announcement highlights the success of the investments into the City of Detroit and its residents made by public and private entities, which has helped the city secure recent honors such as the 2024 NFL Draft, the best emerging startup ecosystem, and more.

“The Motor City is on the move and will continue to put the world on notice as a top-tier destination to live, work, play, and visit,” said Governor Gretchen Whitmer. “Already recognized as the number one emerging ecosystem for startups and selected as the home of the 2024 NFL Draft, Detroit continues to grow, attracting talent, events, and investments from across the country and around the world. In Michigan, we will continue getting things done on the kitchen-table issues that matter most so we can keep growing the state’s economy, ensure families have a great quality of life at a good cost of living, and build on our rich, diverse culture. The story of Detroit over the last century is one of resilience and strength, and the future looks bright.”

“As a Detroiter, this means the world to me,” said Lt. Governor Garlin Gilchrist II. “Detroit is one of the best places to raise a family, enjoy world-class entertainment, and live a full life. It is full of diverse, talented, spirited, resilient, and deeply friendly people. It is a center of arts, culture, and innovation, where Detroiters are chasing their dreams and blazing new trails into a bright future. Governor Whitmer and I are proud of the strong partnership we have forged with Detroiters, and we celebrate this unique achievement. We are committed to continuing our work to put Detroit not only on the list of greatest places, but at the very top.”

In addition to showcasing destinations, TIME also highlighted its selection as the site for the nation’s first electric-vehicle charging road that Governor Whitmer announced in 2021, resolidifying its title as the Motor City for the modern age.

“Detroit is truly the textbook definition of a great American city, and not simply because it is the largest city in Michigan, said Wayne County Executive Warren Evans. “What powers Detroit is the same energy that fuels Wayne County; the inherent strength of our cultural and ethnic diversity, our history of confronting and overcoming near-crippling adversity, and our ferocious spirit. The Spirit of Detroit is a flame that can never be extinguished.”

"It's gratifying that TIME has recognized what Detroiters always have known: that Detroit is a great city with an extraordinary history," said Mayor Mike Duggan. "We still have work to do, but Detroit is in the midst of a real rebirth - one that many had thought was impossible just a few years ago. Thanks to the efforts of city residents and employees, and the support of our business and philanthropic community, the reinvestment that began in our downtown core has spread to neighborhoods across the city. Opportunity is more abundant and equitable today than at perhaps any time in our city's history.  All of this adds up to more people seeing Detroit as a great place to live, work, visit and invest in."

“Visitors come to Detroit to experience our world-changing music scene, the heartbeat of American innovation, and vibrant culinary possibilities, but they fall in love with the people and the stories of our region,” said Visit Detroit President and CEO Claude Molinari. “Visit Detroit proudly embraces our role in attracting millions of visitors every year, and now that TIME has named Detroit one of the World’s Greatest Places, we look forward to welcoming even more.”

The TIME article highlights many dining destinations that are uniquely Detroit, including the Midnight Temple, Rosemary, What’s Crackin, and Basan. Each of these restaurants offer authentic cuisine from a variety of cultural backgrounds. In addition to Detroit’s cuisine, TIME also encouraged tourists to visit Detroit's plethora of museums, including the Motown Musuem, which is set to reopen this summer following a $55 million renovation and expansion. For more information about places to explore in the Motor City click here.

From “Tragedy” to One of the “World’s Greatest Places”

In 2009, Detroit was featured in a TIME Special Report called “The Tragedy of Detroit – How a great city fell and how it can rise again” which gave a yearlong look inside Detroit’s past and a hopeful look towards its future. 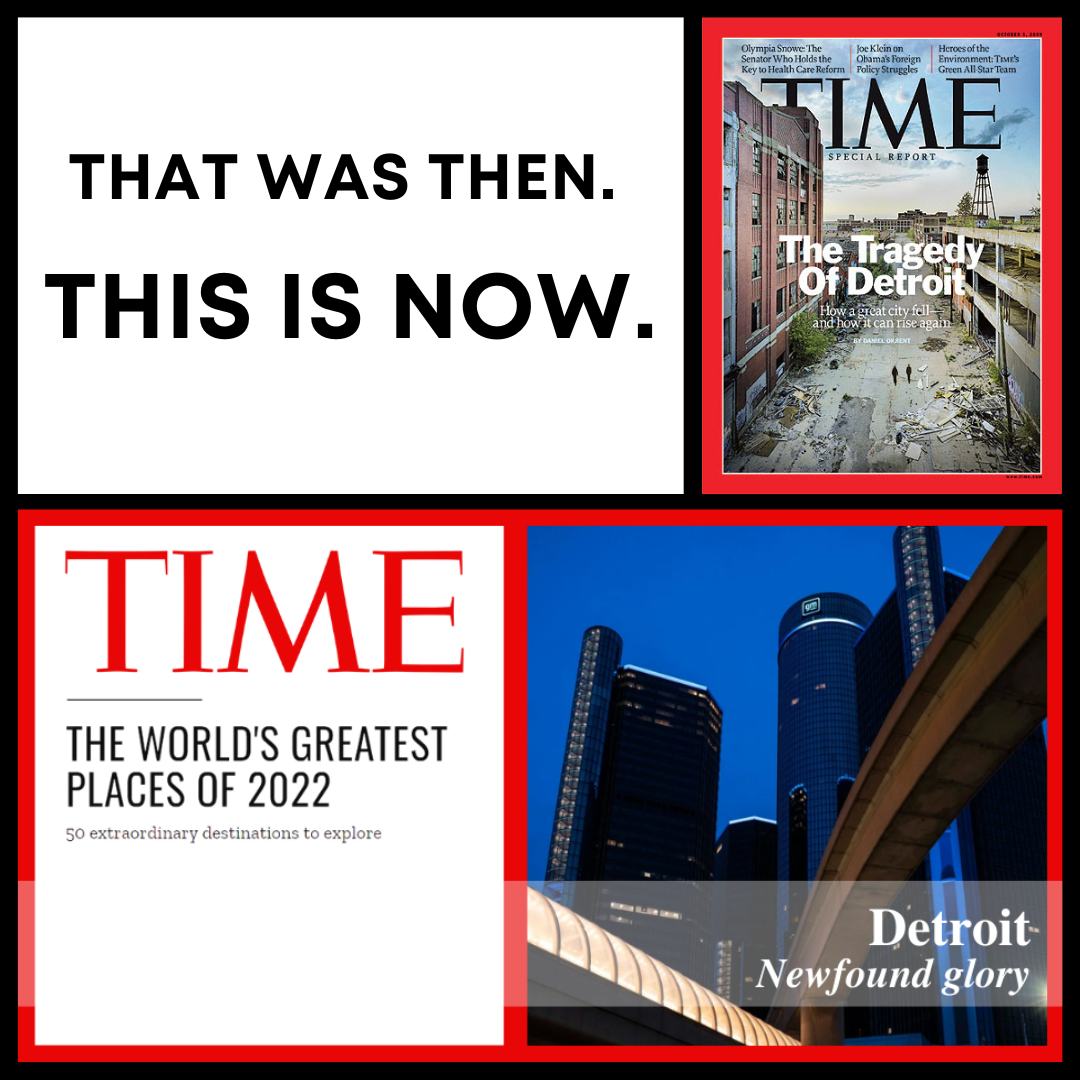 In addition to being named one of the greatest places in the world, Detroit was named as the world’s number one “emerging ecosystem” for startups by Startup Genome.

This comes just a few months after Governor Whitmer joined private and public partners to announce a $126 million investment into the Michigan Central Innovation District. This new district, anchored by the iconic Michigan Central Train Station, will serve as a globally recognized hub for talent, mobility innovation, entrepreneurship, sustainability, affordable housing, small business opportunities and community engagement. The state of Michigan, coordinated by the Office of Future Mobility and Electrification, will support the launch and growth of programs in the district that create conditions for high-skill job creation, startup company growth, risk capital and technology commercialization, among other activities.

The report looked at four different categories: performance, funding, connectedness, and talent. Detroit received a perfect score in three of these categories and an eight in funding.

The Detroit Center for Innovation (DCI) will be a world-class research, education and entrepreneurship center. It is a collaboration between the University of Michigan, Related Companies and Olympia Development to advance innovation- and talent-focused community development, propelling city and statewide job creation and inclusive economic growth. $100 million in funding for the DCI was also included in the bipartisan budget signed by Governor Gretchen Whitmer.

The DCI will be anchored by the University of Michigan, which will operate an approximately $300 million, 200,000-square-foot center focused on academic programs and research related to fields in which advanced technology is increasingly critical. Development of the Innovation Center will also feature, a new hotel, retail space on the Woodward-fronting surface, more commercial development along Columbia Street and affordable and market-rate residential space along Park Avenue.

In August, The World Economic Forum announced a new global Centre for Urban Transformation with Governor Whitmer, headquartered in Detroit. The Centre seeks to increase public-private collaboration in cities and advance more inclusive and sustainable models for urban development.

This includes mobilizing the global business community and other stakeholders to commit expertise and resources in support of local communities, advancing models for inclusive urban development, and exploring new approaches to expand urban services and economic opportunity in low-income and traditionally marginalized communities.

In April, Governor Whitmer and Lt. Governor Gilchrist II joined the National Football League (NFL), Detroit Lions, and local leaders to announce the city had been chosen to host the 2024 NFL Draft. The selection came one year after Governor Whitmer and many other partners urged the NFL to consider Detroit for this event. The NFL’s selection is a testament to Detroit’s spirit and marks another major organization making an historic investment in Michigan.