LANSING, Mich. – Today, Governor Gretchen Whitmer announced the Federal Highway Administration (FHWA) has awarded $50 million to reimburse Michigan for emergency road and bridge repairs made in 2020 after dam failures and flooding in mid-Michigan. Michigan was awarded one of the largest grants in the country, receiving nearly 10% of the $513 million awarded under the Emergency Relief Program.

“This grant will bring federal taxpayer dollars back to Michigan and help us continue to fix the damn roads and bridges,” said Governor Whitmer. “In 2020, after historic flooding and dam failures, we took action to fix impacted roads and bridges, and I am grateful that Michigan is getting that money back. Since I took office through the end of this year, we will fix 16,000 lane miles of road and 1,200 bridges, and we need to maximize every dollar we have to invest in our infrastructure and make it easier for families and businesses to get around our state. We have been through a lot over the last couple of years, but tough times call for tough people, and we will keep getting things done and moving Michigan forward.”

“These funds with help communities across our nation repair roads and bridges damaged by severe weather events, which are becoming increasingly common because of climate change,” said U.S. Transportation Secretary Pete Buttigieg. “From recent hurricanes that struck the Gulf Coast, to wildfires in California and floods and mudslides in numerous states, we must address the devastating impacts of climate change and work to build more sustainable transportation infrastructure to better withstand its impacts for years to come.”

“This critical funding will provide Michigan with even more resources to invest in our infrastructure and make Michigan's communities more resilient," said Zach Kolodin, Chief Infrastructure Officer for the State of Michigan. “We look forward to working with local communities to identify funding opportunities that will enable them to complete infrastructure projects that will be transformational.”

Following extensive flood damage caused by dam breaches in May 2020, nearly 30 roads and bridges across the region were closed and suffered damage. In Midland and Gladwin counties, three bridges within a 2-mile distance were closed to traffic after being washed away. US-10 at Sanford Lake was also closed to traffic due to extreme scour of bridge piers and the bridge approaches being washed away.

For the following two years, MDOT has been working closely with FHWA, the Midland County Road Commission, and the village of Sanford to reestablish mobility across Midland and Gladwin counties.

US-10 at Sanford Lake in Midland County

After the flooding, US-10 at Sanford Lake in Midland County was closed to traffic during the flooding and remained closed due to damage sustained to the piers and bridge approach on both sides. The location was inspected by MDOT staff about 24 hours post flood, and an emergency contract let for bidding two days later. The awarded contractor mobilized on the Saturday of Memorial Day weekend and worked seven days a week for two weeks to ensure one bound of US-10 would reopen as soon as possible. On Thursday, June 4 crews opened the eastbound US-10 bridge, and put both directions of traffic on that bound. By the first week of July (about 5 weeks post flood), traffic was restored to normal on US-10 and crews turned their attention to remaining projects. 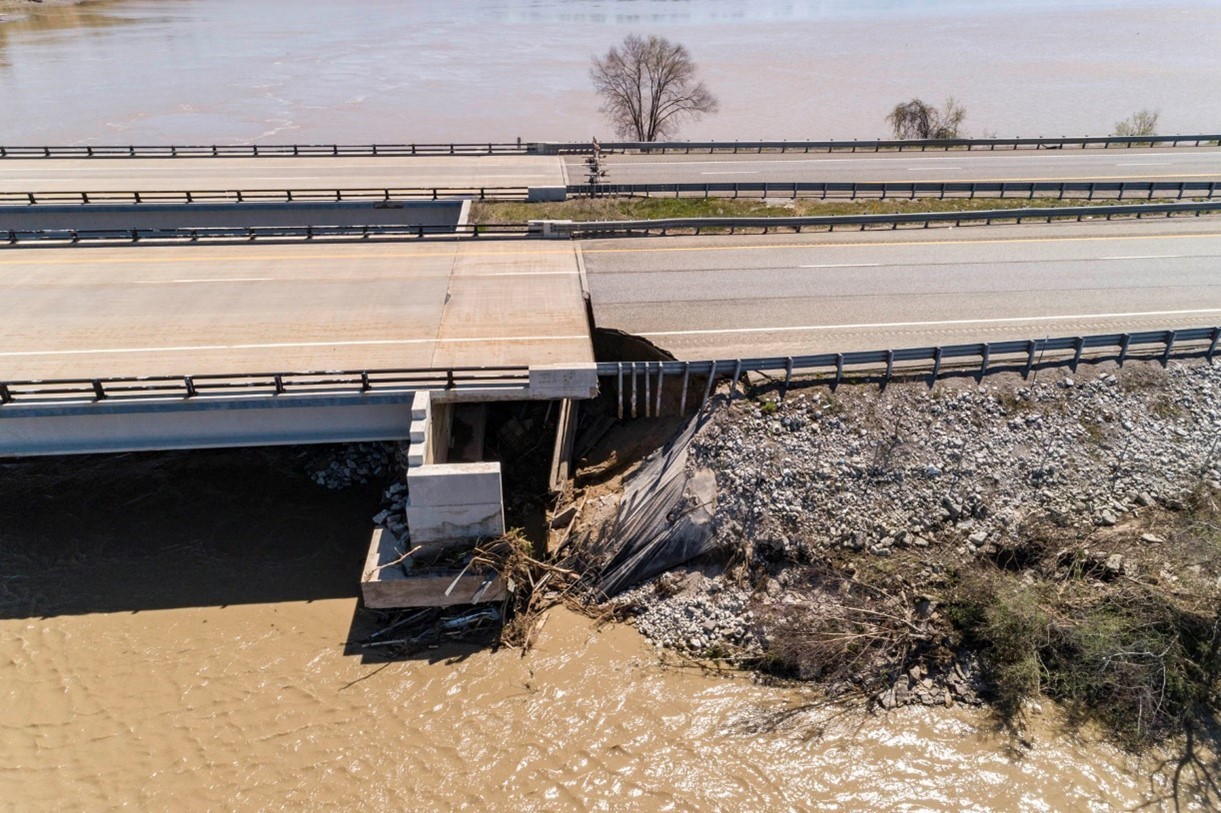 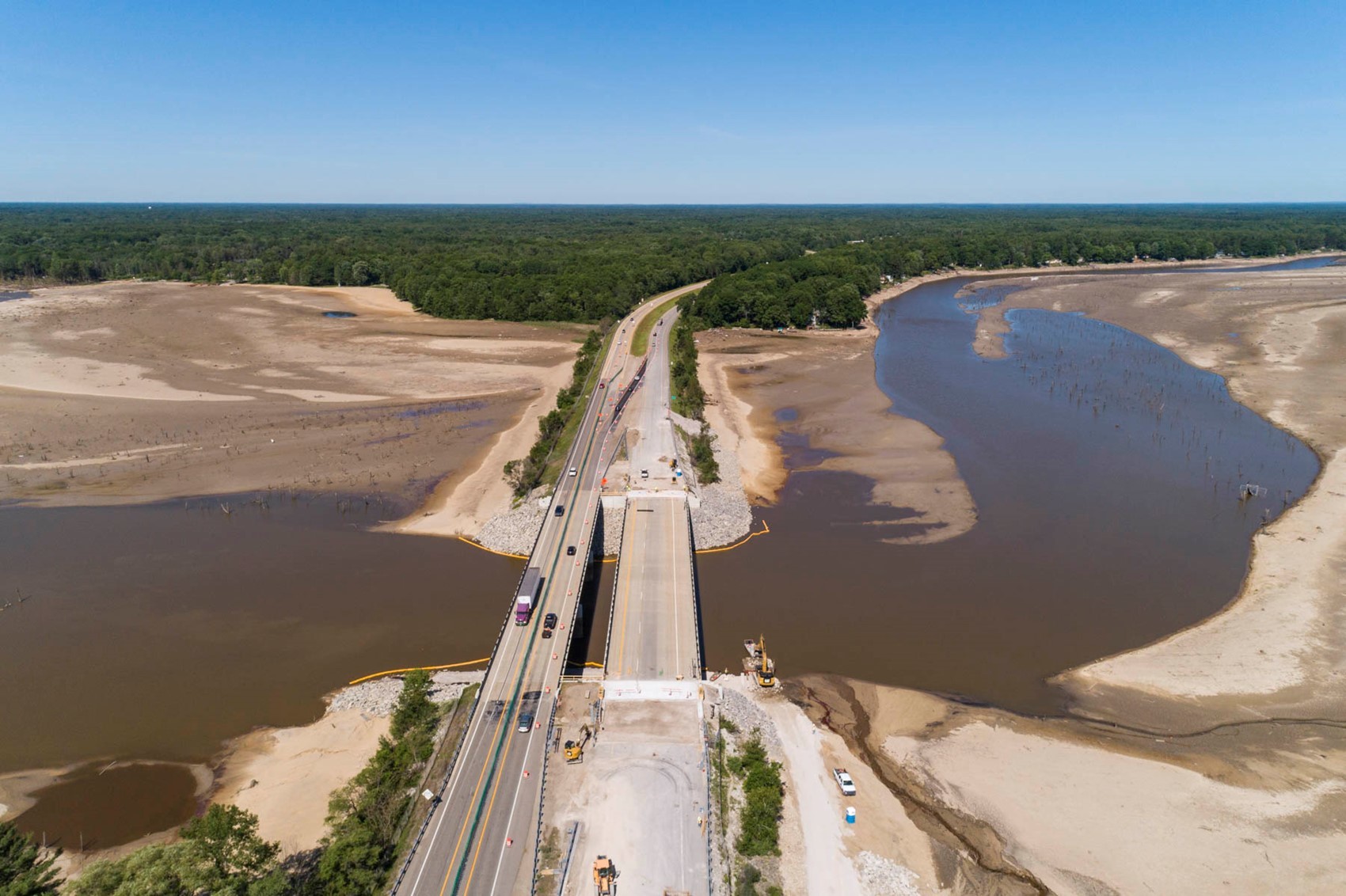 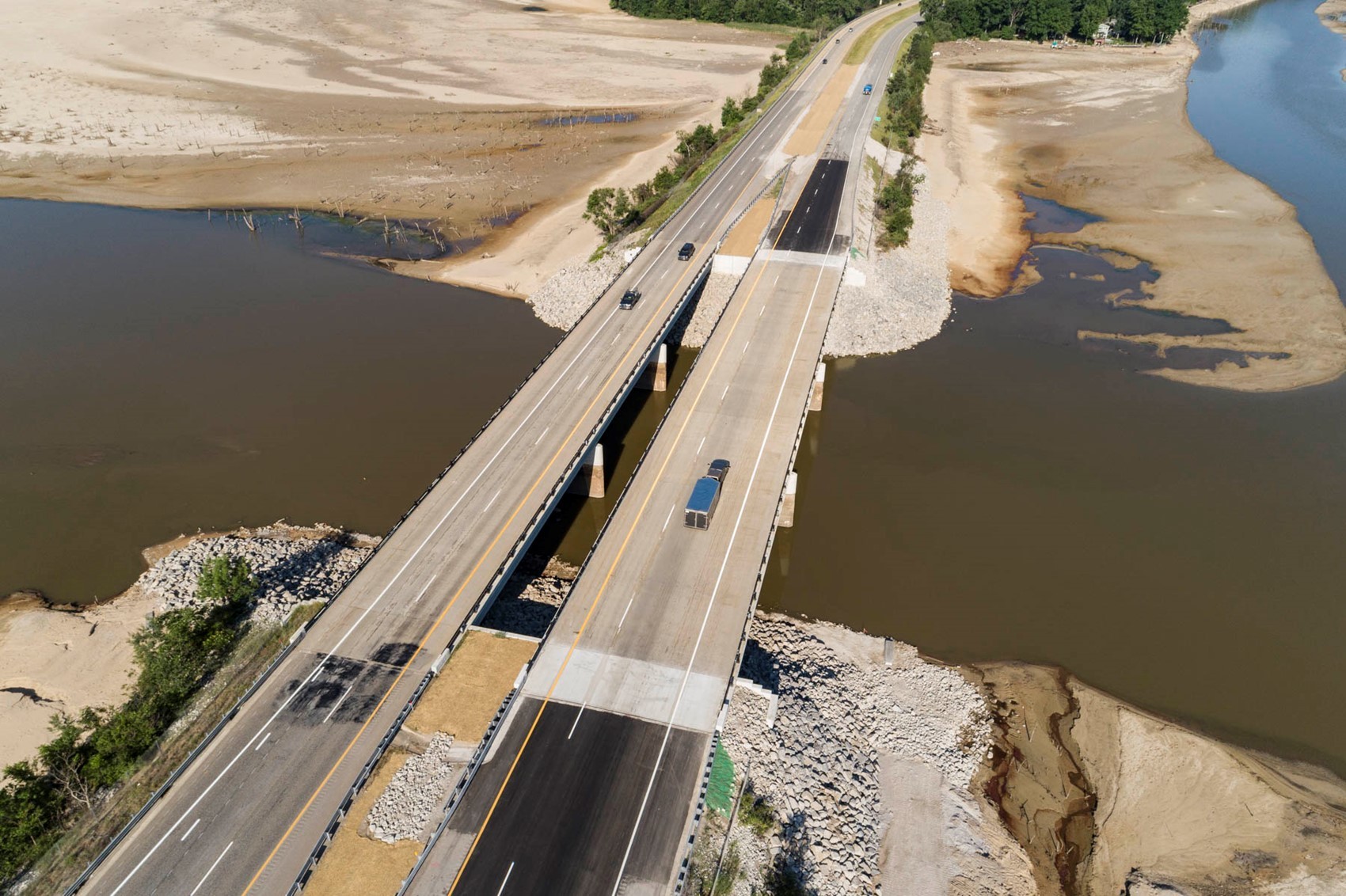 M-30 over the Tittabawassee River

The M-30 roadway over the Tittabawassee River suffered damage to the piers, railing of the bridge, and the bridge approach was washed away due to rapid water flow. Following two emergency contracts, one focusing on debris removal, and one to repair the bridge and rebuild the roadway approach, the bridge reopened to traffic in mid-Sept. This also restored mobility for several local residents who had primary homes located between the two M-30 bridge locations. Debris removal contract totaled $1.4 million for this location and M-30 over the Tobacco River. This bridge location also was awarded a $1.2 million contract to replace the bridge and bridge approach. 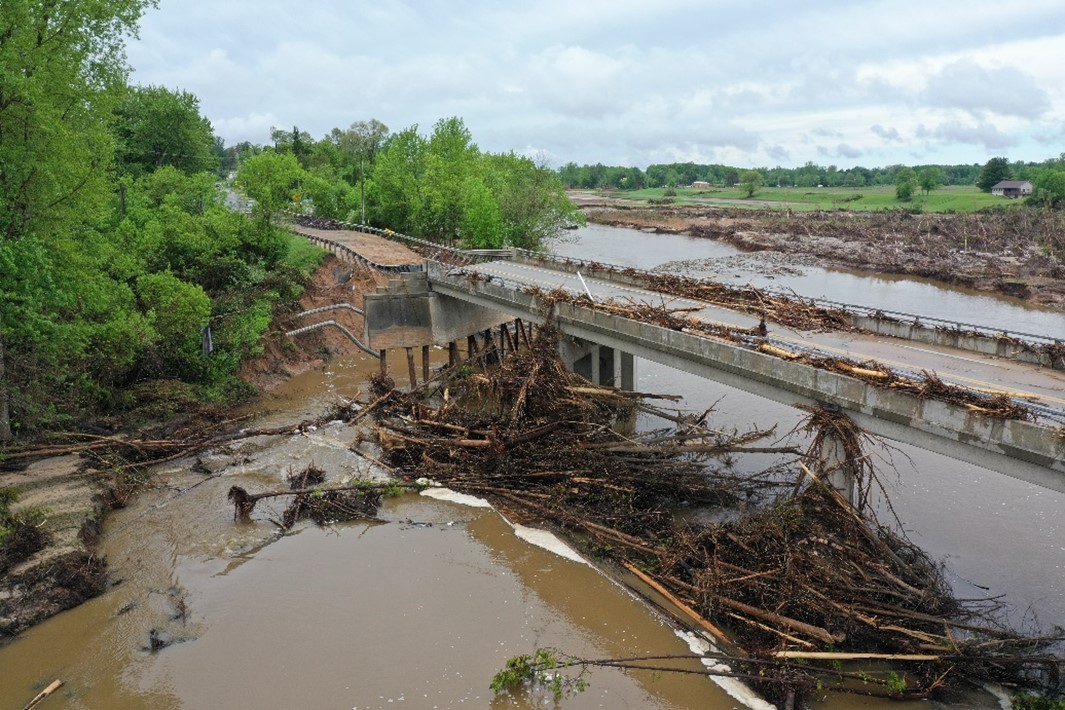 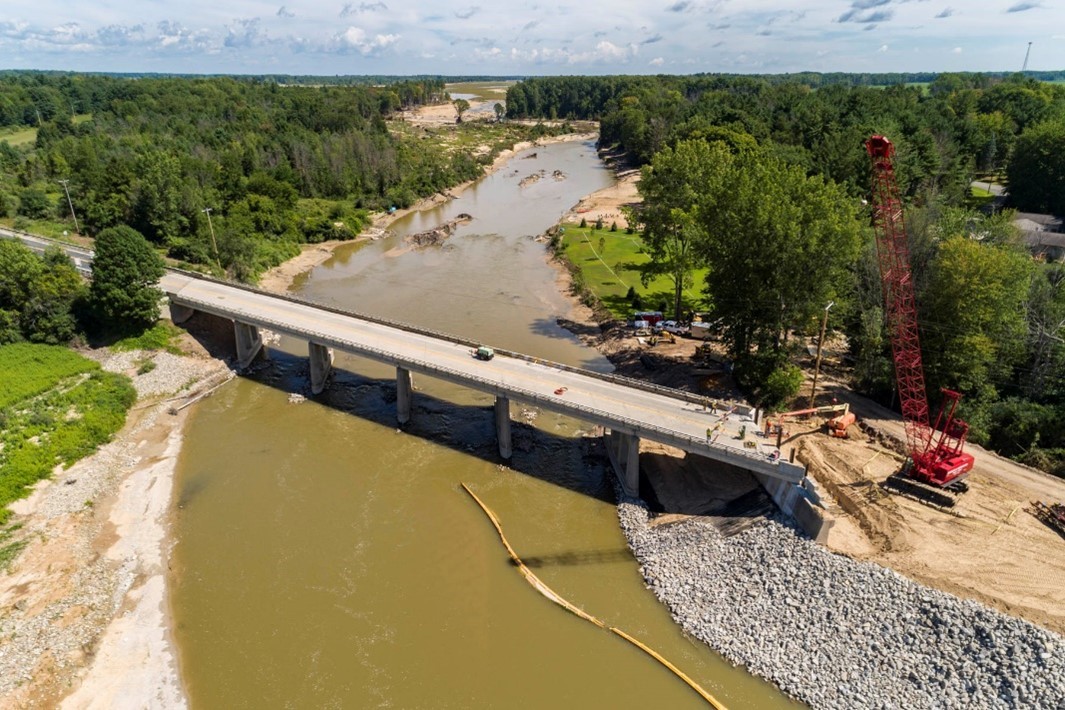 Curtis Road over the Tittabawassee River

Curtis Road over the Tittabawassee River also suffered extensive damage to the piers and bridge railing. Rushing waters removed approximately 600 feet of roadway, which was rebuilt in addition to the bridge repairs. This is a local bridge under the jurisdiction of the Midland County Road Commission. MDOT crews worked closely with the MCRC to supervise the design and construction of these repairs, allowing the road commission to focus their attention on other emergency repairs throughout the county. The $1.2 million contract was complete in November. 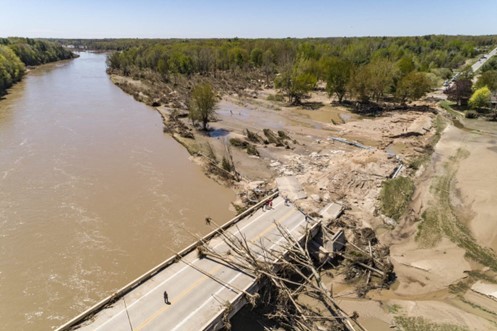 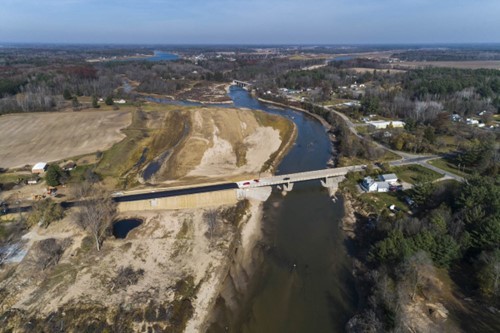 Saginaw Road Bridge in the Village of Sanford

The Saginaw Road Bridge in the Village of Sanford was destroyed by flood waters. MDOT managed the replacement of the bridge to allow village leadership to focus their attention on other damaged roads and buildings in their community. The Saginaw Road bridge reopened to traffic on Oct. 23. Village president, Delores Porte said the detour previously in place meant first responders had an additional 7-8 minutes added to response times. The bridge reopened one night ahead of structure fire that was contained to only a garage because the fire department was able to use the newly built bridge. Fire officials reported if the entire home would have been engulfed if they had been forced to use the detour previously in place. 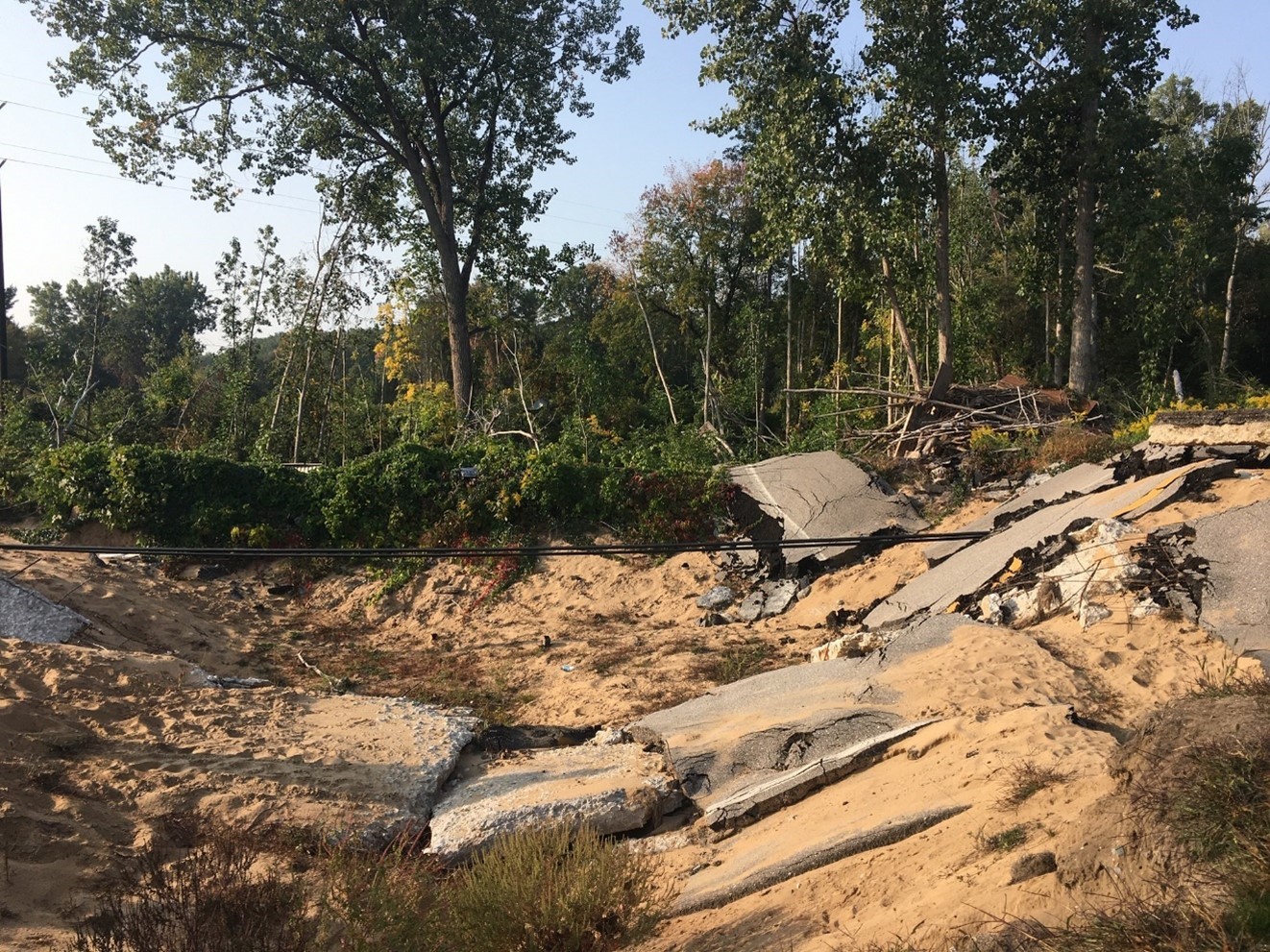 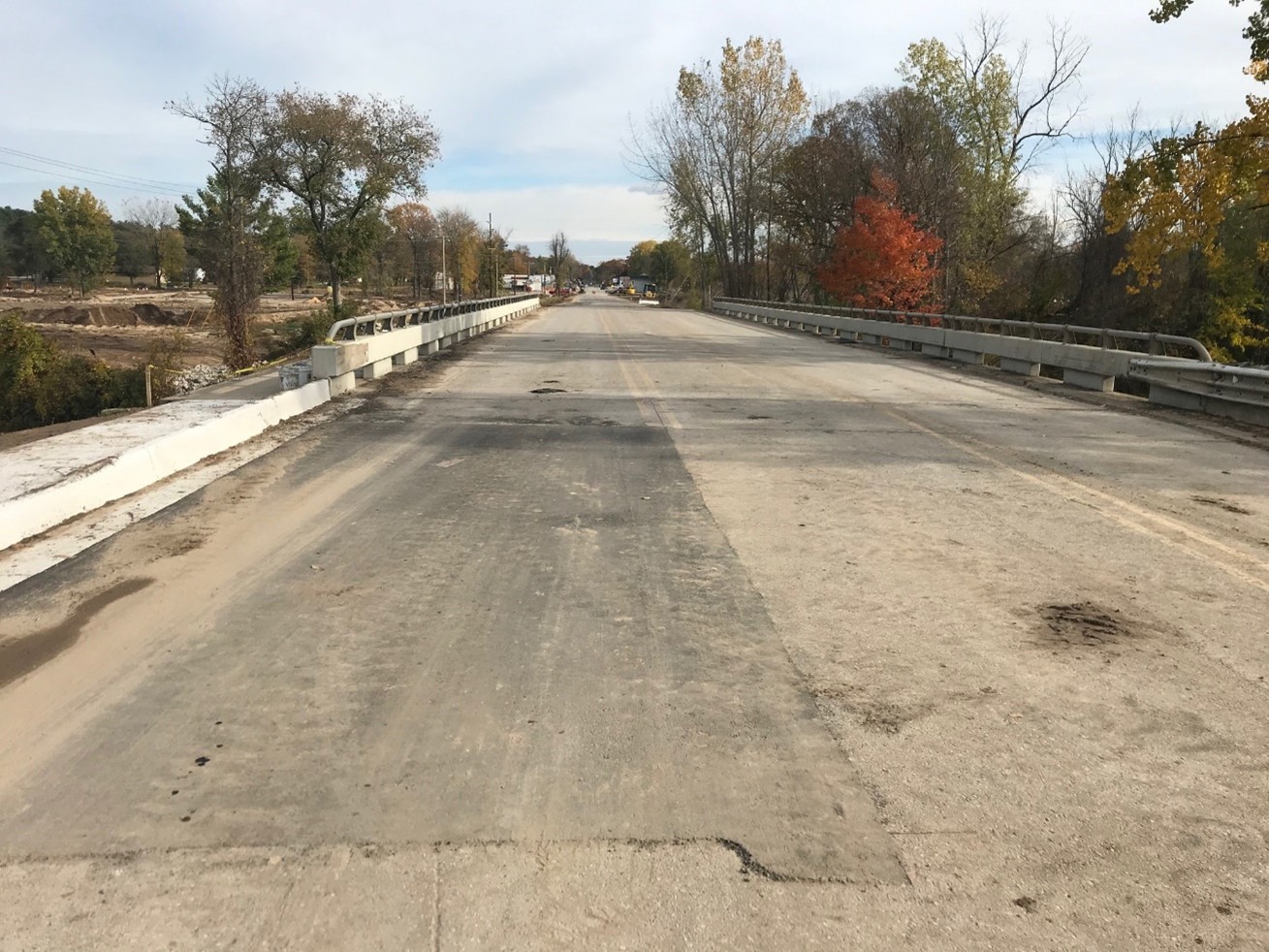 The M-30 Causeway Bridge over the Tobacco River was completely washed away during the flood. The bridge washout left area residents stranded, damaged businesses, and impacted local utilities for months. While EGLE continued the investigation into the dam failure, MDOT moved forward with the construction of a temporary bridge to replace the former causeway bridge. This reinstated mobility to the corridor faster than traditional bridge construction. 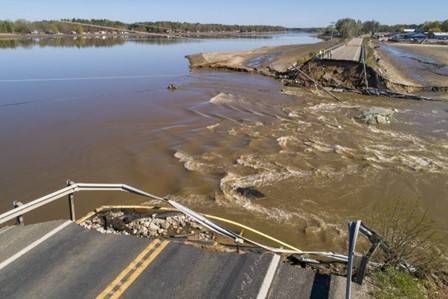 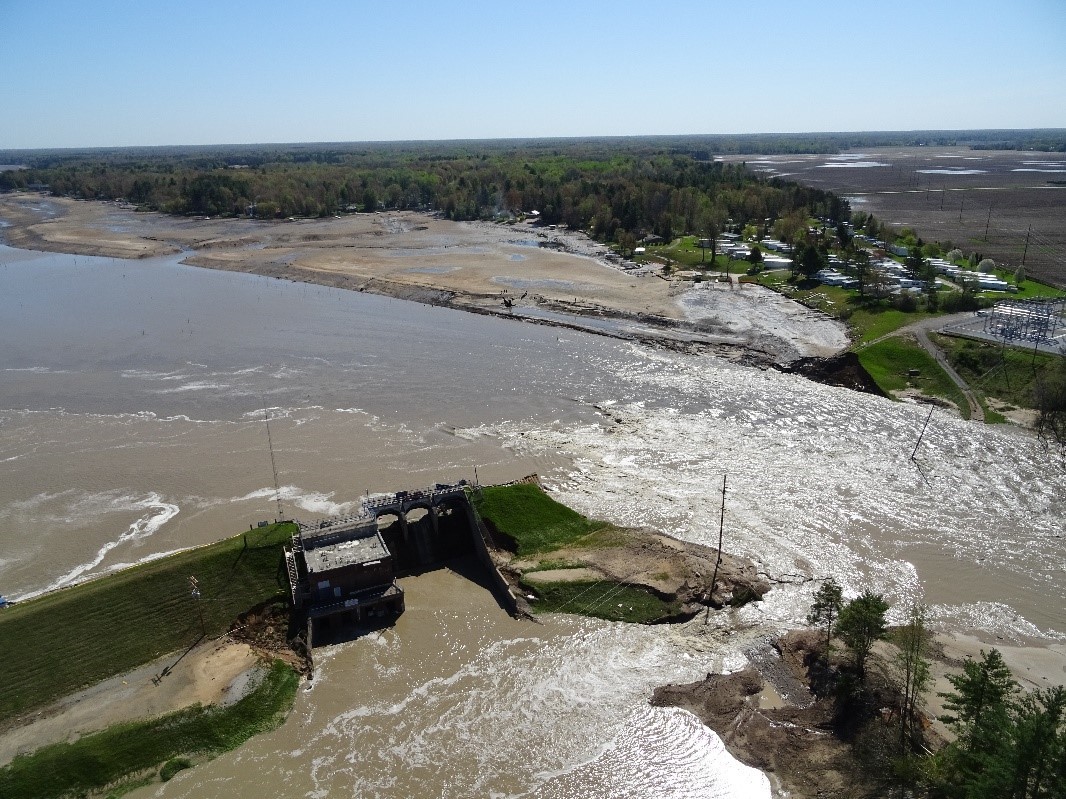 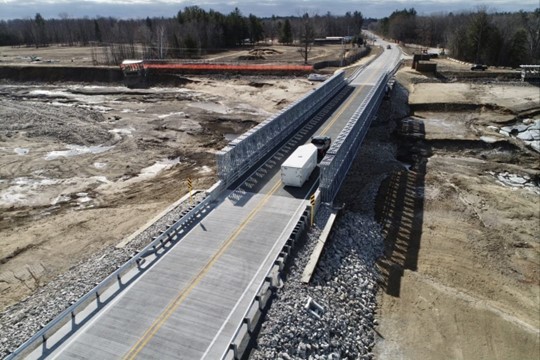 The FHWA will send $50 million in emergency relief funds to Michigan to reimburse the state for repairs it made to roadways and bridges following the severe flooding in mid-Michigan in 2020. The flooding prompted the governor to declare a state of emergency, order the evacuation of more than 10,000 residents, and contributed to the failure of the Edenville and Sanford dams.

The reimbursement is part of aid the FHWA is distributing to states and territories for repairs to roads and bridges damaged by storms, floods, wildfires and other recent severe weather events. Michigan received a larger reimbursement than most other states with the exceptions of California and Puerto Rico, who faced historic wildfires and hurricanes, respectively.