“Today, Michigan competed for and won funding for the I-375 modernization project to replace a mile of highway in Detroit with an accessible boulevard, expanding opportunities for local small businesses and reconnecting communities split apart nearly six decades ago,” said Governor Whitmer. “In the 1950s, I-375 paved through two prosperous Black communities and displaced over 130,000 Michiganders and hundreds of businesses. While we cannot change the past, we can work together to build a more just future, and that’s exactly what today’s grant empowers us to do. We fought hard to secure this funding to create a corridor of economic opportunity in Detroit and build on the city’s growing economic momentum. I want to thank our Congressional Delegation again for their support of the Bipartisan infrastructure Law, from which these federal funds were secured. I am proud that we got this done with extensive community input and are fixing the damn roads in every region of the state the right way.”

“This stretch of I-375 cuts like a gash through the neighborhood, one of the many examples I have seen in communities across the country where a piece of infrastructure has become a barrier,” said U.S. Transportation Secretary Pete Buttigieg. “With these funds, we’re now partnering with the state and the community to transform it into a road that will connect rather than divide.”

“Today’s announcement is about Detroit’s future,” said Lt. Governor Garlin Gilchrist II. “The I-375 revitalization project will reconnect neighborhoods on both sides of the freeway and move us toward righting a past injustice. It also creates a new platform to grow our economy, creates opportunities for local entrepreneurs, and boosts accessibility for all Detroiters. It’s the latest sign – from the NFL Draft and the Joe Louis Greenway to Michigan Central Station – that Detroit is on the move. Governor Whitmer and I will continue standing tall with Detroiters to accelerate our economy, create jobs, and build prosperity in Detroit.”

“I cannot thank Sec. Buttigieg and USDOT enough for recognizing the value this project will bring the community,” said Paul C. Ajegba, Director of the Michigan Department of Transportation. “For several years, my team has been working hard to reinvent this corridor with the goal of acknowledging mistakes of the past, reconnecting neighborhoods and spurring economic growth. This grant marks a significant move forward."

"I'm ready to fill in the ditch called I-375 and make it a beautiful, bustling boulevard, connecting the city of Detroit," said Detroit Mayor Mike Duggan. "We all know the painful history of I-375, and the city's planning staff is having ongoing conversations with the community on how we're going to transform I-375 together. Today's announcement means we're going to be able to speed this project up from 2027 to 2025, thanks to the city, state and federal government all working together. Let's fill in the ditch and re-knit this community."

“The I-375 expressway is a clear example of this country’s racist history of using the construction of the interstate system to destroy bustling Black neighborhoods," said Representative Rashida Tlaib. I am extremely proud to have provided support for the United States Department of Transportation award to MDOT and the City of Detroit for over $100 million to the 13th Congressional District to help in the effort to replace I-375 and reconnect neighborhoods with our downtown. I look forward to the continued conversation and work to correct this painful wrong, and to using the lessons from this to create an equitable future for us all.”

“After years of public engagement around the proposed I-375 Project, it’s exciting to arrive at the point when design work can begin and further engagement with the community will take place,” said Detroit City Council President Mary Sheffield. “Given the historic disruption of thriving African American communities caused by I-375, I am also hopeful that restoration and opportunity will be an integral part of the process moving forward.”

“Investment in our infrastructure is critical, even more so when it rights the wrongs perpetuated by racism,” said Detroit City Council Member Mary Waters. “This area, once called Black Bottom, was a vibrant Black neighborhood that was bulldozed through in the name of ‘progress’.  By returning I-375 to the community, we make true progress toward remedying the years of displacement and disinvestment in Black communities.”

“Infrastructure projects like I-375 have the power to connect communities and spur inclusive development,” said Zachary Kolodin, Michigan’s Chief Infrastructure Officer. “There is tremendous opportunity with this project to better engage with the community and local businesses to ensure we are wholly understanding the priorities and needs within the areas that undergo revitalization--and we want to get it right. Michigan has now won more than $240 million in competitive Bipartisan Infrastructure Law funding, which has enabled the commencement and completion of innovative and transformative projects across the state. The Michigan Infrastructure Office remains committed to pursuing and winning additional funding in order to make long-lasting improvements to our state's infrastructure."

“I-375 bulldozed two vibrant Black neighborhoods and is part of an unjust and painful chapter in our  history,” said Senator Debbie Stabenow. “Instead of dividing our communities, we now have a chance to reconnect them and take a big step toward building a better future. Thanks to this major federal investment and commitments by MDOT and the City of Detroit, this project has the potential to create economic opportunities for our local businesses and residents.”

“This investment is going to make a big difference for families and businesses in downtown Detroit by reconnecting neighborhoods to key economic hubs and improving the quality of life for area residents,” said Senator Gary Peters. “I advocated for this project to be funded because it will not only spur economic growth and opportunity, but also help the city modernize critical infrastructure along the I-375 corridor, improve access to public transit, and address deep-rooted social and environmental justice concerns.”

“I am excited for my home state of Michigan to receive this Department of Transportation grant to support major upgrades to I-375, while making our transportation system more resilient,” said Rep. Brenda L. Lawrence (MI-14). “Over $104 million will be distributed to make significant improvements to the freeway, create good-paying jobs, and spur economic development in Detroit. We are ramping up investments in smart solutions to repair our roads and make communities more equitable for residents in my district and Michiganders at large.”

The new street-level boulevard will begin south of the I-75 interchange and continue to Atwater Street. It will use the city’s existing road grid to ensure a smooth flow of traffic by facilitating additional connections to the Detroit riverfront, Eastern Market, and Brush Park. It will be six lanes for most of its route, not counting turn lanes, and four lanes between Jefferson Avenue and Atwater Street.

In addition to new lanes for automobiles, there will be a two-way cycle track on the east side of the boulevard connecting the riverfront to the Montcalm Street extension and extend west to Brush Street and east to Gratiot Avenue, where it will connect with the Dequindre Cut bicycle path.

I-375 was built nearly 60 years ago. During construction, prominent Black neighborhoods Black Bottom and Paradise Valley were demolished to make way for the freeway. Constructed through a thriving Hasting Street, the new I-375 opened in 1964 and created a barrier between the central business district in Detroit and the neighborhoods to the east, resulting in decades of underinvestment and a lack of opportunity for the predominantly Black communities on the other side of the freeway.

Several blocks of commercial and residential buildings were also levelled to make way for the freeway and urban renewal. Although I-375 has a number of cross-bridges, many properties declined due to reduced connectivity and especially because the community's economic and residential base was substantially dislocated.

Today, almost three generations later, Michigan can eliminate this obstacle and provide easier access to better jobs, services, and quality of life to the residents of adjacent areas of persistent poverty. After nearly 60 years of use, I-375, the I-75/I-375 Interchange, and associated bridges are nearing the end of their useful service life and require modernization.

Extensive research was conducted starting in 2014 with a Planning and Environmental Linkage (PEL) study to identify and evaluate alternatives for the corridor that would meet the transportation needs of all users in a cost-effective manner and improve connectivity. The PEL determined that the transformation from a freeway to a boulevard was feasible. The conclusion of the PEL lead to an Environmental Assessment (EA) study to document the human and natural impacts associated with any proposed improvements. Guided by the study’s purpose and need, as well as extensive public outreach, a preferred alternative was developed and presented at both a virtual meeting and an in-person public hearing in January 2021.

MDOT and the Federal Highway Administration (FHWA) have documented and thoroughly reviewed the public comments submitted in the FONSI, which is the final National Environmental Policy Act (NEPA) decision document and describes why the I-375 improvement project will not have any significant environmental impacts expected to occur upon implementation of the selected alternative design. NEPA is about people and places and balances engineering and transportation needs with social, economic, and natural environmental factors.

MDOT added measures to be taken that acknowledge the impacts on residents and business owners in the former Black Bottom and Paradis Valley neighborhoods. These measures include:

Since taking office through the end of 2022, Governor Whitmer and Lt. Governor Gilchrist will have fixed, repaired, or replaced more than 16,000 lane miles of road and 1,200 bridges, supporting more than 89,000 jobs without raising taxes by a dime. These and future repairs are made possible by the Rebuilding Michigan plan, a five-year, $3.5 billion investment in our highways and bridges, and the bipartisan Building Michigan Together Plan, the largest one-time investment in Michigan's infrastructure in state history. These strategic investments in Michigan's infrastructure ensure that future Michiganders will have safer roads and bridges to run errands, travel, and strengthen the economy.

Infrastructure Investments in the FY 2023 Budget 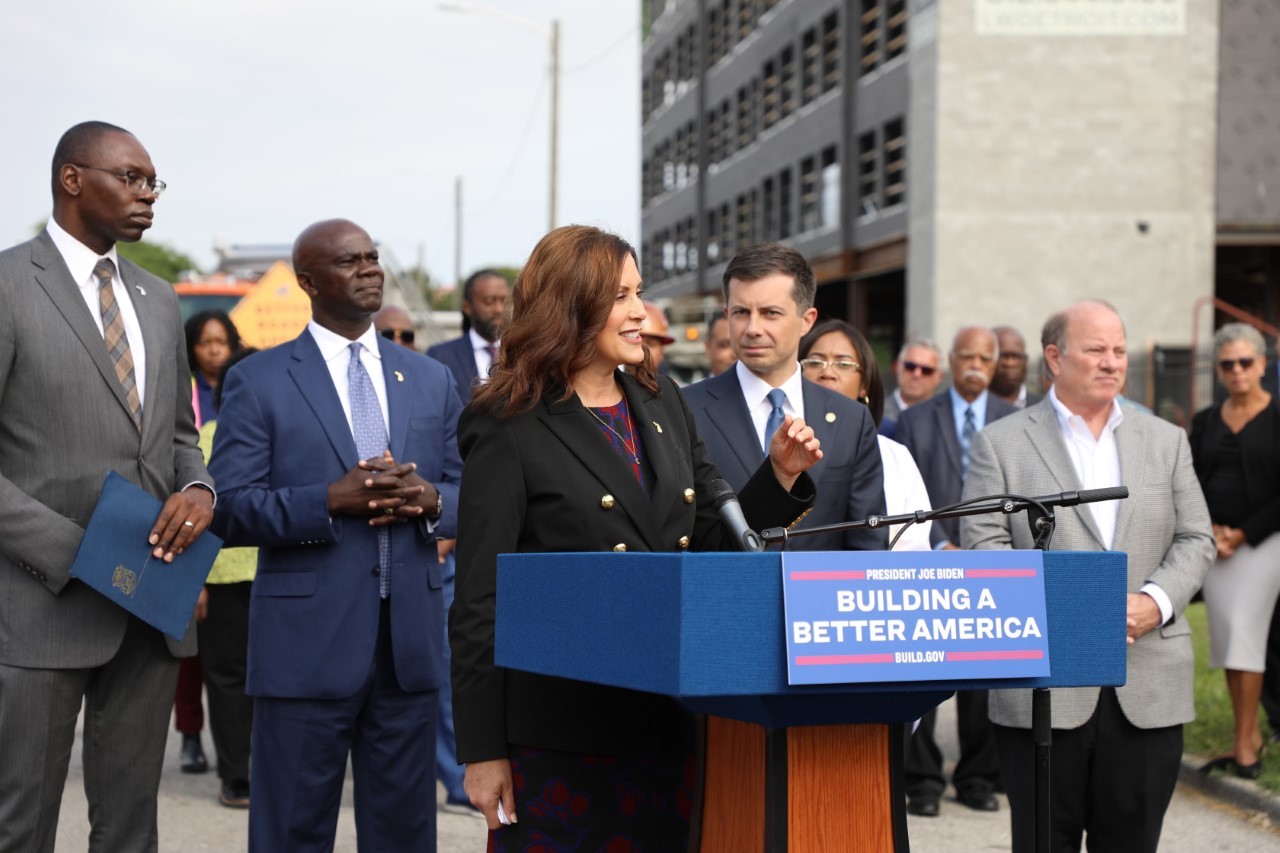 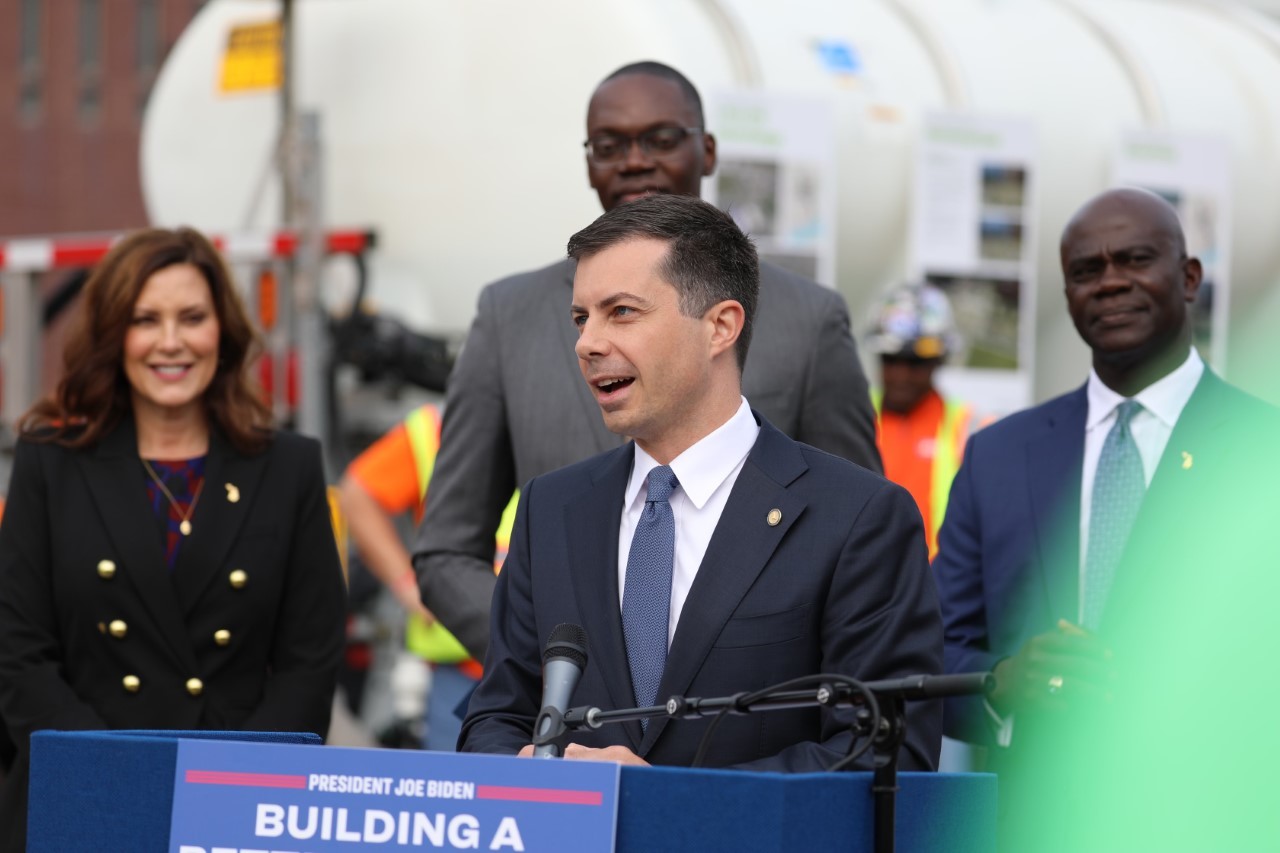 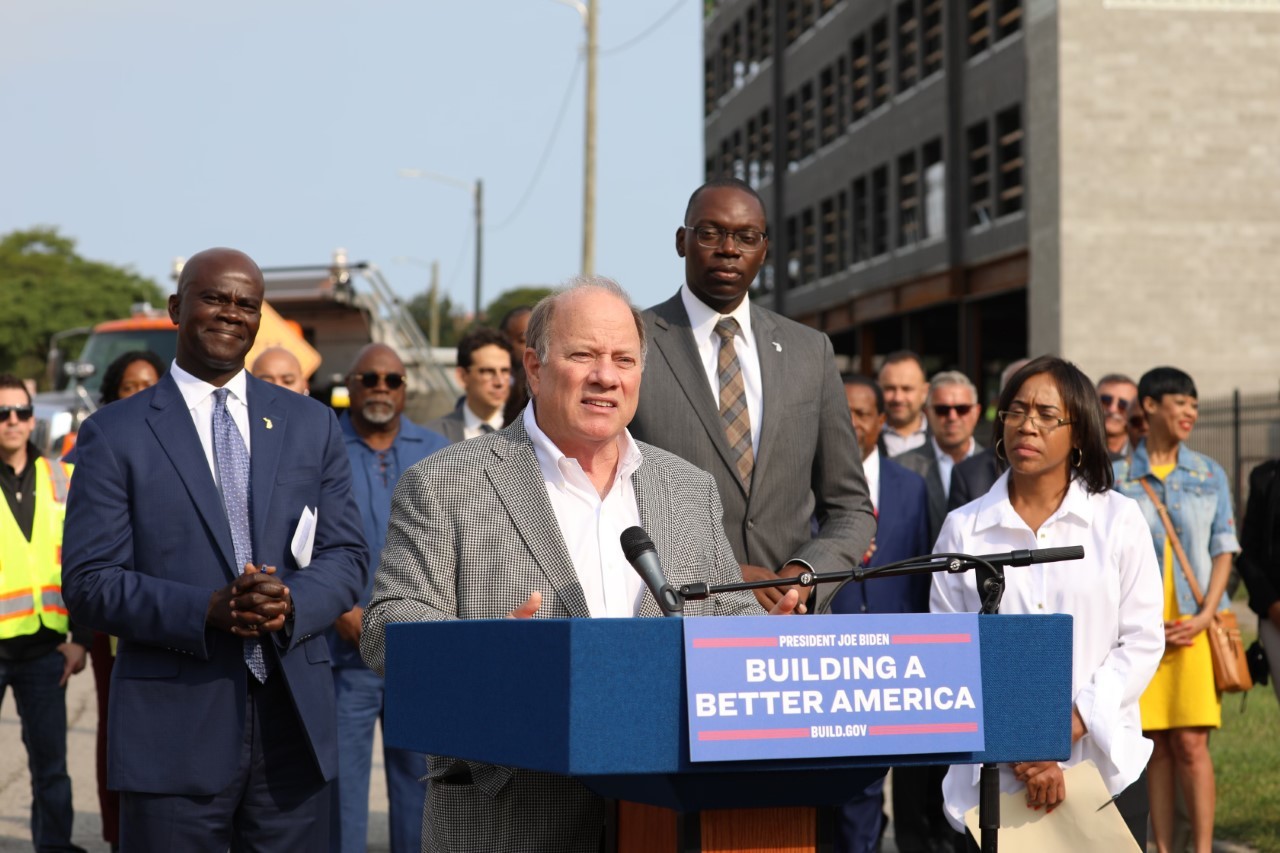