PFAS Sampling in Lakes and Streams

PFAS Sampling in Lakes and Streams 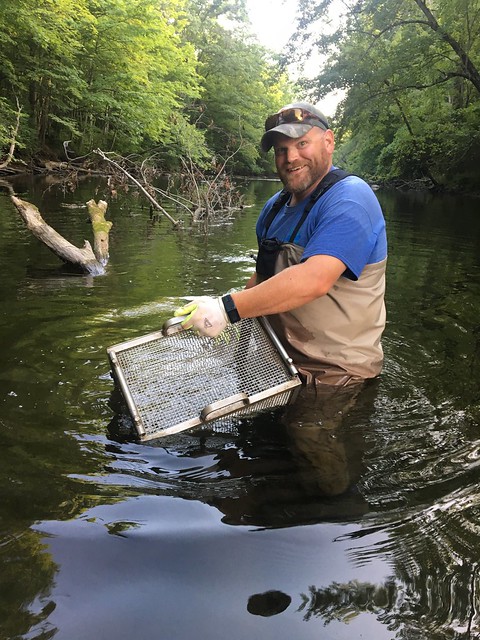 The Michigan Department of Environment, Great Lakes, and Energy (EGLE) Water Resources Division (WRD) collects fish and water samples from Michigan lakes and streams. Fish are collected to help identify where fish consumption advisories are needed.  Water sampling is done to help identify sources of PFAS.  Below is a summary of some of our efforts.

PFAS is the family of per- and
polyfluoroalkyl substances. One of the
most commonly detected substances is
perfluorooctanesulfonic acid (PFOS),
in part because it bioaccumulates, or
builds up, in fish.

The WRD works with the Michigan Department of Natural Resources to collect fish to be used by the Michigan Department of Health and Human Services to determine if a fish consumption advisory is needed.  As of mid-September 2018 nearly 1,300 fish samples from 55 waterbodies have been analyzed for PFAS along with other contaminants.  Fish have most recently been collected from Gull Lake (Kalamazoo County); Lake Pleasant (Genesee County); Base Line and Portage Lakes (Livingston/Washtenaw Counties); Emerald, Myers, Bella Vista, and Reeds Lakes (Kent County); and Long and Palmer Lakes (St. Joseph County).  Fish collections are planned for the Rogue, Chippewa, Flint, Huron, and Thornapple Rivers.

Learn more information about PFAS testing in fish and wildlife.

EGLE first analyzed PFAS in surface water in 2001 when 21 Michigan streams were sampled for perfluorooctanoic acid (PFOA) and perfluorooctanesulfonic acid (PFOS).  The study found varying levels of both chemicals but the concentrations were not considered to be a problem based on what was known about PFAS at the time.

In 2011, PFOS concentrations
in fish collected near Wurtsmith
were as high as 424 parts per
billion (ppb) in smallmouth
bass and 9,580 ppb in
pumpkinseed. The "Do Not Eat"
advisory kicks in for results
greater than 300 ppb PFOS.

The discovery in 2011 of very high levels of PFOS in fish from a pond near the former Wurtsmith Air Force Base in Oscoda prompted a more intensive statewide sampling of Michigan rivers in 2013 and 2014.  The results of that effort indicated several rivers had PFOS concentrations above background levels in either water, fish, or both.

EGLE's WRD has since conducted numerous targeted PFAS sampling efforts to monitor rivers and lakes used as drinking water sources, and to help identify sources of PFAS in rivers and lakes.  In 2016 and 2017 WRD staff expanded the 2013-2014 statewide reconnaissance effort and also conducted focused investigations in areas where elevated PFAS levels have been found or were suspected.  Those areas included:

The WRD sampling efforts have found sources of PFAS contamination that are now being addressed.

In 2017 lake and stream PFAS samples were collected from 12 rivers across Michigan. In 2018 the WRD continued this sampling for source identification, drinking water protection, and protection of public health. Significant sampling events have targeted the Kalamazoo, Huron, Clinton, Flint, and St. Joseph Rivers, as well as the River Raisin.